“All people young and old, are welcome to come, see and enjoy the islands, and leave them as they found them for the unborn generations to come see and enjoy.”      –  Michael the First

Even after I shared two posts on my Saltee experiences I still have a lot to say. I love this place.

When we arrived to Kilmore Quay to catch our motor boat, the sea looked rough. In the days of sail, the area around the Islands was known as “the graveyard of a thousand ships”.  I cannot tell that I have a brilliant memory, but this sort of information somehow always gets stuck in my head.

We boarded our boats – twelve in each – and off we went.  Not wanting to get soaked in salty wate, I went inside the boat, and it was a grave mistake. The waves were rolling over the boat; a few times the wave hit the bottom of the boat so hard that I though it would break up in pieces. Half way to the island, fighting sea sickness I had to get out, and there I stood another 15 minutes all soaked but unable even to move to make myself comfortable.  I barely remember the short trip on the inflatable boat; I was focused on staying conscious. It took me some six hours to completely recover – right before our trip back.

We walked up the steps, passed by the owners’ house and headed to the Puffin place. The island was wrapped in fog.

The cliffs surrounding the first bay  near the cave known as the Wherry Hole are the nesting place for Atlantic Puffins.

I am very glad to tell you that there were remarkably more puffins this year than the year before.  Knowing that the birds return to their old burrows, I went to check out my buddy who made such a great model for me last year, and there he was – with some more neighbours, possibly his own grown up chicks from the previous years.

Puffins start breeding when they are five years old.  They use their pre-breeding years to learn about feeding places, choosing a mate and nest sites.

I went around for some more shots. The fun will start in the afternoon when the puffins go fishing and return with the bunches of the Sand eels in their beaks. 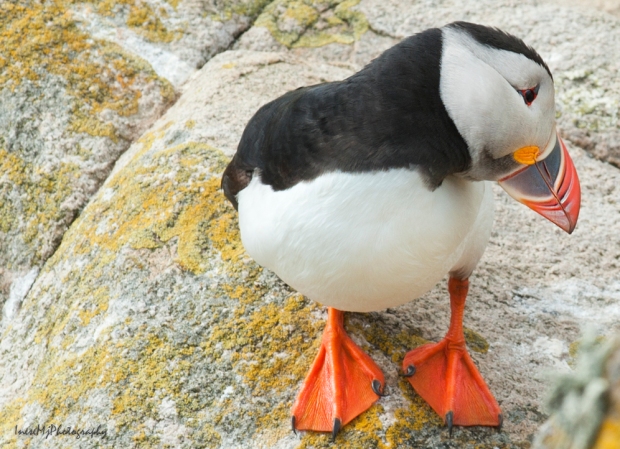 During winter, the beaks and feet of puffins fade in color, and every spring they turn  bright orange again in preparation for the breeding season.  The beak increases in size as the bird matures.

Here you can listen to a puffin  –  you will love it 🙂  Puffins usually make noises when sitting in their burrows, and the acoustics are very impressive.  I will post the link separately to give a credit to ProjectPuffin : http://projectpuffin.audubon.org/sites/default/files/audio/atpu.wav

In this photograph you can see two cameras set up by the Ornithologists to watch the puffins.

We came a couple of weeks too early: most of the puffins young haven’t hatched yet,  but still we got lucky to see some feeding birds that afternoon.

The puffin’s beak can hold up to 60 fish.  The raspy tongue holds fish against spines on the palate allowing the puffin to open his  beak to catch more fish. 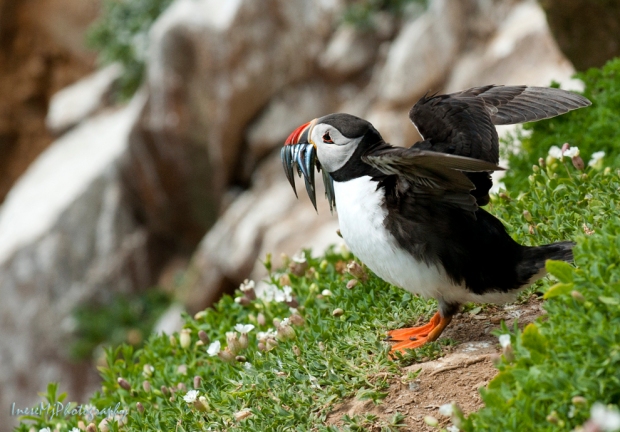 We were lucky with the weather also. It was a dry day,  a little bit overcast. It is difficult to take photographs of puffins in the sun because of their black and white plumage.

A few more puffins. The couples stay together all their life. Males are usually slightly larger than females, otherwise there is no difference. 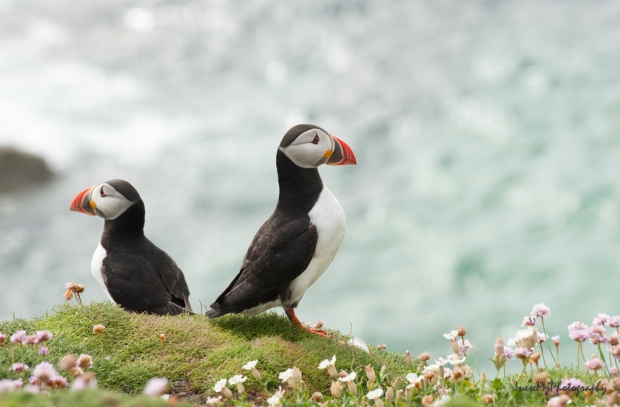 This family is still working on their nest.  Puffins lay one egg per year. 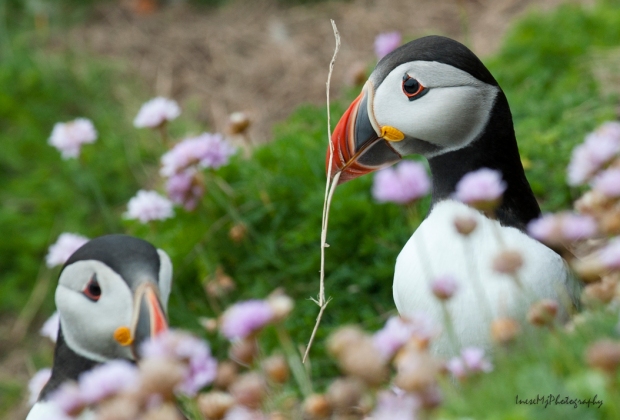 Puffins are very clumsy on the ground and in the flight. They are rather falling than landing, with a thud. In this photograph you can see some spots around the puffin. You might think it is some dirt on my lens, but it is the sand in the air. When a puffin is taking off he beats his wings and lifts up all the dust and sand.

Great Saltee Island is some 2-3 km long.  I am leaving the Puffins’ place and start hiking to the Southern part of the island along the well-trodden path. 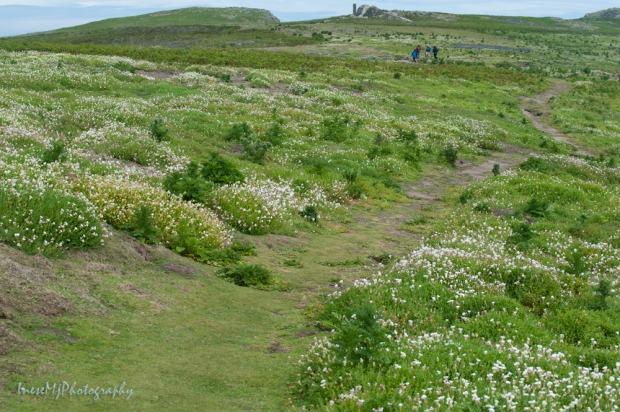 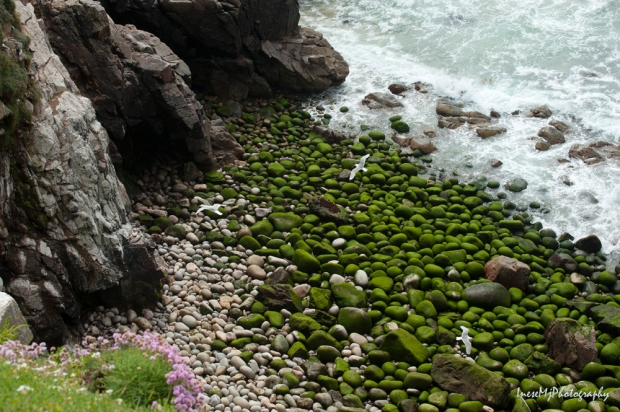 The islands  were used as a base for pirates and smugglers for centuries. The gain of these folks could very well be hidden in the many caves, like the one in the image above, but there are treasures bigger than money, and they are not hidden anywhere.

More from the Saltees in the end of the week. Hope you loved the puffins.

Have a peaceful week!