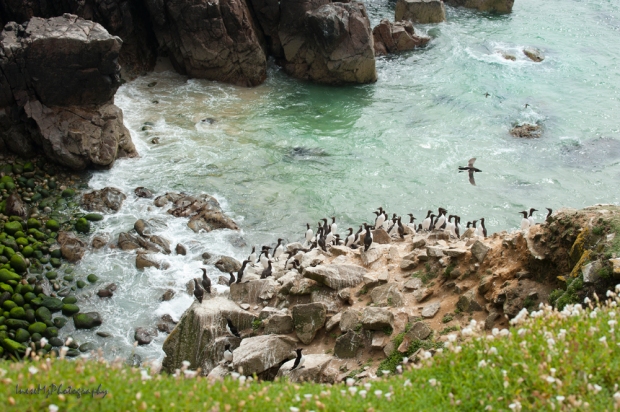 First three hours were gone in a blink. It is the magic of Puffins.  I was on my way to the Cat Cliff on the Southern end of the island – the land of the Northern Gannets.

Great Saltee island ascends from 3-5m high shore on the mainland side to 20-30m high cliffs on its south-eastern side. The Southern Summit rises to an altitude of 58m. 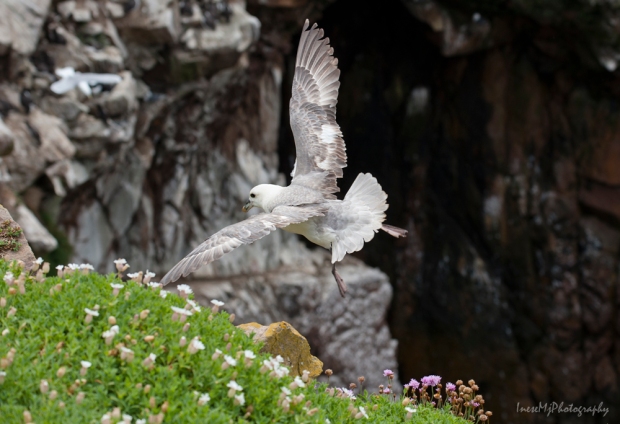 I was walking along a stone wall, and after it ended the path took steep up through the waist-high ferns.

On the summit I made a stop to take a picture. It was still foggy. 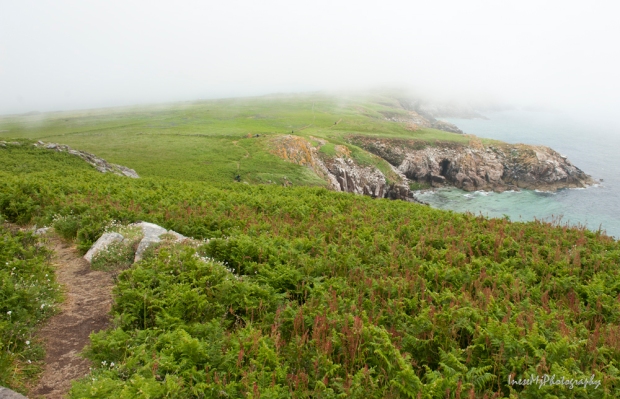 A Great black backed gull was standing on a rock. I came closer. It is a large bird, a predator attacking and killing even the far larger animals and birds, and I didn’t want to take a risk. Yet, I didn’t notice the chicks until they ran and hid themselves, and only then I knew I was in trouble.  The last thing I needed was to be struck by a gull! I turned back and walked away as fast as  I could without running in panic, while the gull’s partner repeatedly flew over my head diving low enough to touch my hair.  With its wingspan of 150-170cm the attacking gull was as good as a small aircraft. 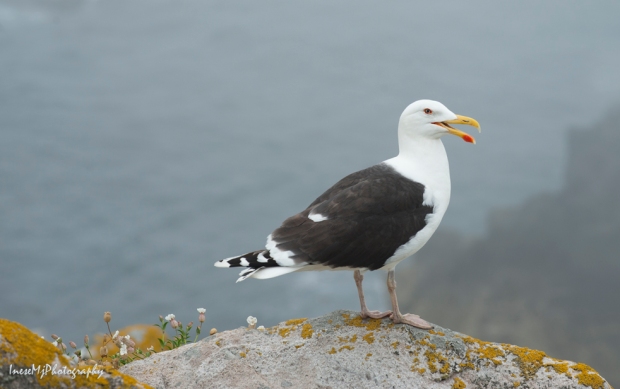 I caught up with the other photographers and we headed to the Cat Cliff barely visible in the mist.

There was another gull – a male with no chicks around ( we will see them later). 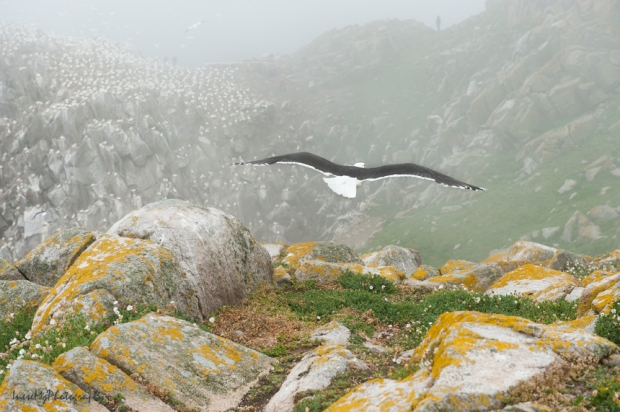 To get to the Cat Cliff takes an effort, but it was a fun climb because of the many species of the sea birds and their young we met on our way.  Look at these Razorbills with their soft fluffy bellies.

A young Common shag looks from under the rock… 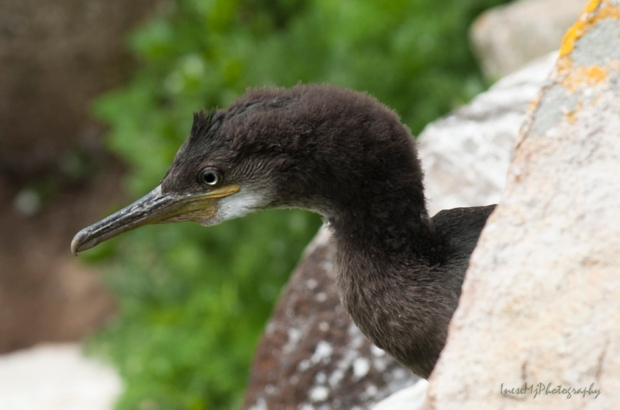 …and makes a careful step with his clumsy webbed foot.

An adult bird is different, all shiny and beautiful.

This is the place. A small colony of Gannets are settled on the left from the Cat Cliff. We don’t go there  – it is a steep cliff and very little room for a tripod.

This is the Cat Cliff itself. 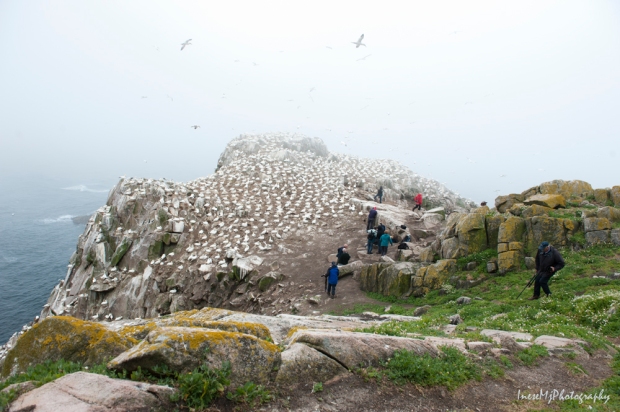 I sat there enjoying the sight, and took this panorama. Unfortunately there is no sky because of the thick fog.

We came very close to the nesting birds, but they didn’t mind. They have lived a long life, and have seen it all…

In my previous posts,  there are more facts  and more different photographs. If you are interested, you can go back and read these post –   I have reblogged them.

Here you can listen to the gannet call. Multiply it by couple of thousand  🙂 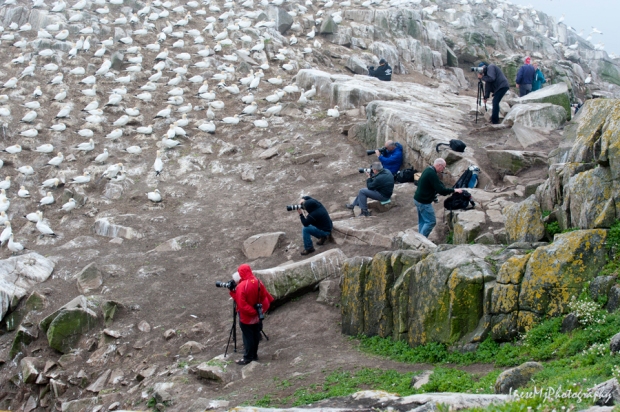 The sky is crawling with Gannets.

After landing the birds perform a “dance”.

Sometimes they bring some weeds. 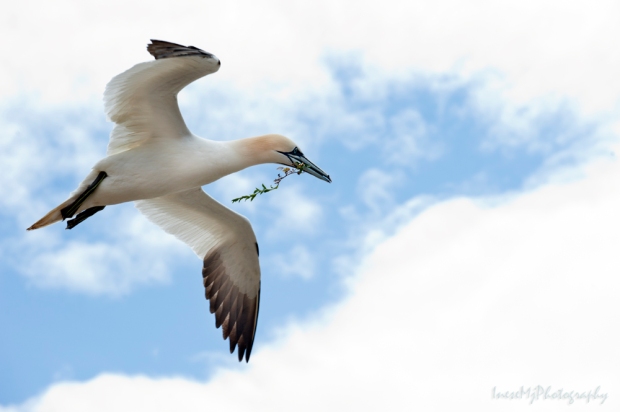 Under every rock there is a chick. I have no idea what bird they belong to.

This one looks different.

And finally I see them – the chicks of the Great black backed gull I photographed in the flight. Their mother is standing next to them and looking at me with the menacing red eye. They are so tiny and innocent, but the fact is that three more killers will join the party soon. Sorry for the Puffins…

Look at this tiny wing 🙂 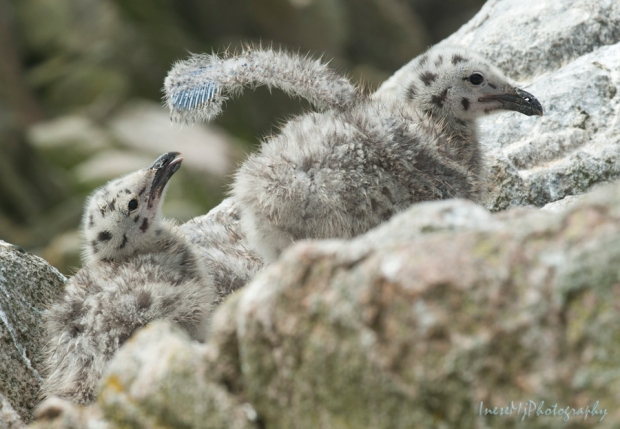 Who can find the chicks in this photograph in 10 seconds?  🙂

On the way back the sky cleared for a few minutes and I took another picture of the island. 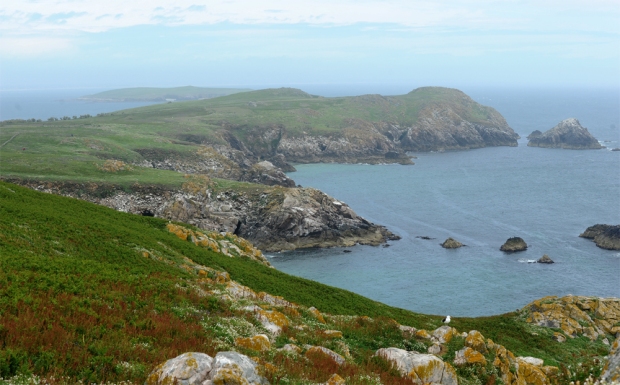 We also got to see the seals. 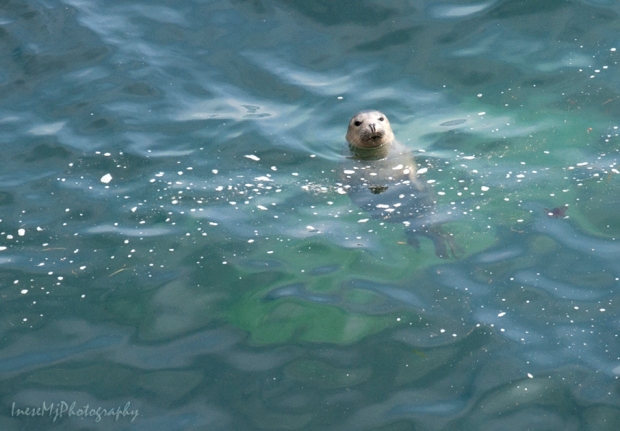 The boat was coming in an hour.  I started getting nervous.  This photograph of a tiny rock that stuck between the big rocks forever shows exactly how I felt. 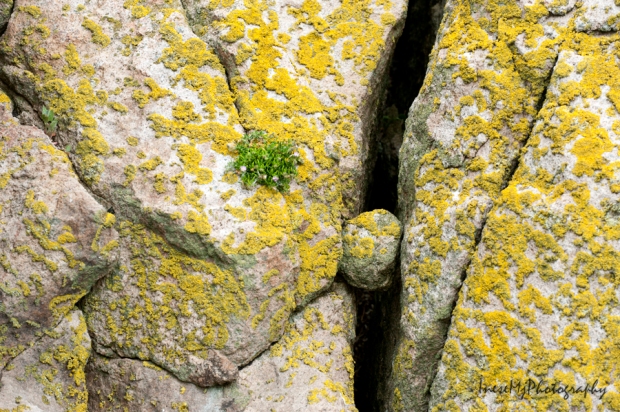 We went down to the Boulder Beach and sat there looking in the mist. Our motorboats finally came, the inflatable boats took us six at a time on board, and off we went again. Lucky me. The wind was not that strong, and I had never left the deck this time, all soaked in seawater but perfectly well and happy.

Thank you for reading about my adventures!