Sweet puffin looks at me with his wise grey eye.  Another hour on the island and the boat will come to pick us up. I don’t want to leave. I want to stay there, on the edge of the cliff, and see what he sees. 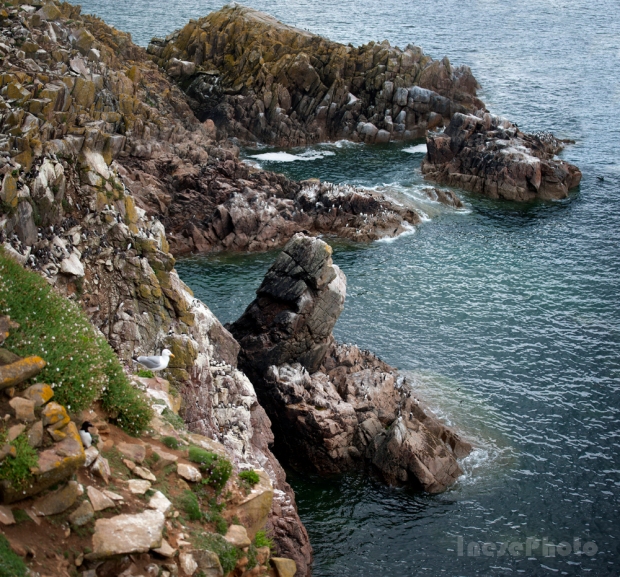 There is a dark cloud coming from the East, and it means rain. 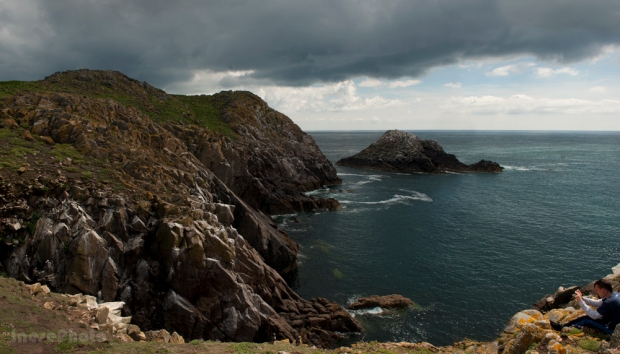 Before long it was raining lazily, and the raindrops sat on the puffin’s back and head, like diamond beads. 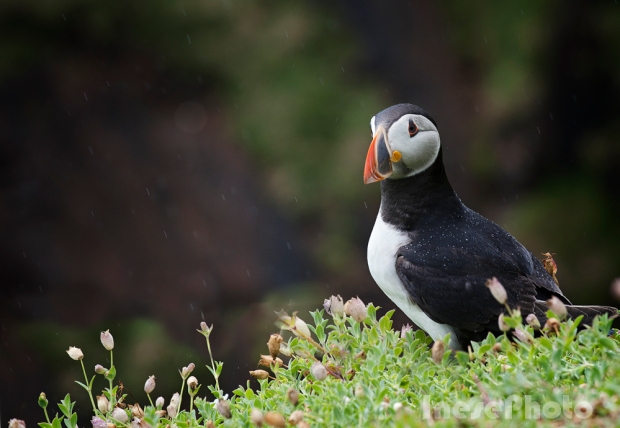 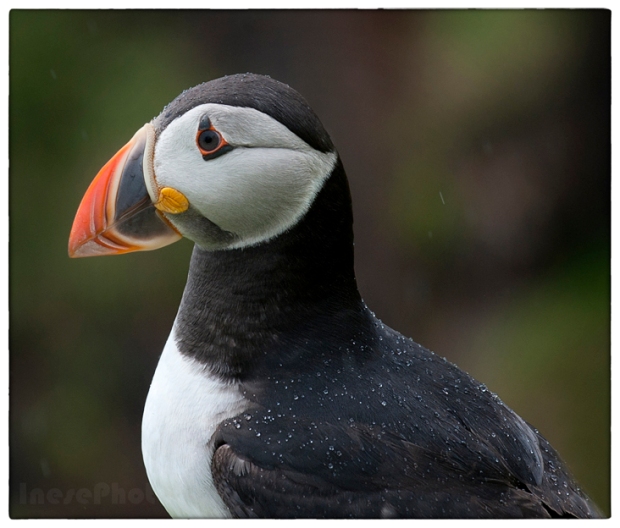 I have had a fabulous time and took many photographs. I photographed birds perched on the cliffs, and in flight, from the front and from behind, …

… single and in groups.

We even saw a family of partridges and a rabbit.

It is time to leave.

We take the stairs down to the rocky shore, and walk along the water edge taking photographs of everything that lies around. 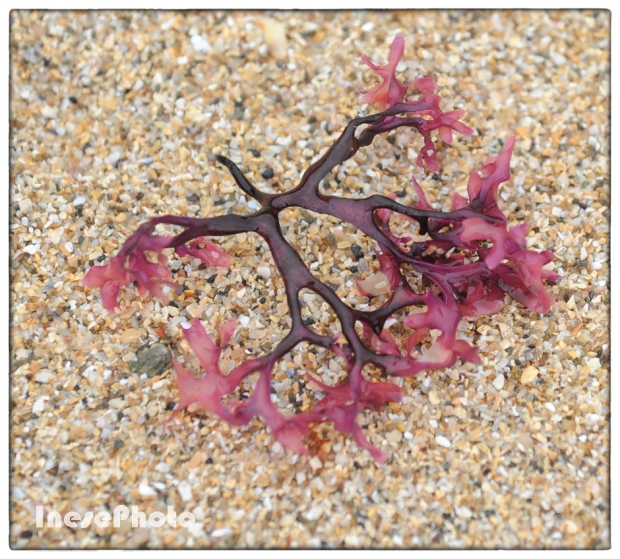 Huge thanks to the Neale family who have turned the islands into the bird sanctuary, and set up a shelter for those who might get stuck on the island overnight.

Our boat arrived with more photographers on board. This group will stay until the dark to take pictures of the sunset. The rubber dinghy is speeding towards the shore. It is also named after a bird. Guess which? A Puffin! 🙂

This is Declan Bates, the captain of  An Crosan, The Razorbill. Last August Captain Bates spotted an overturned boat that capsized near Great Saltee Island. Ten people had been in water for five hours. They were rescued and taken by An Crosan to Kilmore Quay. Nine of them survived.

Thank you for the safe trip, captain!

I do hope you enjoyed this trip, extended over so many blog posts 🙂

Don’t lose connection with the beautiful things of the world. Everything else won’t last long.

This young European Shag was a juvenile when I saw him last year, almost in the same place, and here is his mama and his new brother or sister. I recognized him because of his distinctive shyness, in opposite to his mama who is bold and ill-tempered 🙂

I have never seen a puffin chick. Something to look forward to.

All sorts of  seagulls in the island also have chicks around this time. The parents are standing on the top of the rocks watching their young, ready to swoop and attack an intruder.

Four species of seagulls breed on Saltees. Herring gull is on the Irish Red List of the most threatened bird species. In the 1980s there were about 500 pairs on Great Saltee, and now just over 50 pairs. Good that they can live up to 30 years.

This Herring gull clearly enjoyed posing for a portrait.

Two species of the Black-backed seagulls are nesting on the island. We didn’t want to upset the male perched on the rock and took pictures of the chicks from a distance. This is a Greater Black-backed gull, one of the largest gulls in the world. In one of my previous blogs, I have pictures of this gull in flight. 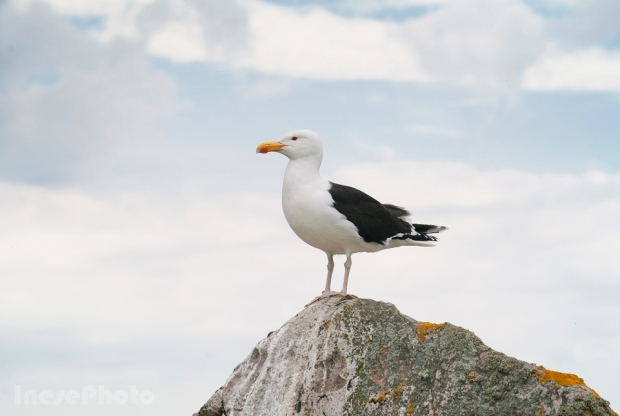 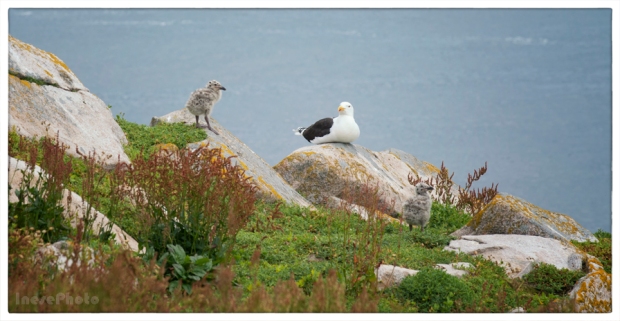 After leaving the Gannet colony I suggested that we should explore the north side of the island. It looked like a green meadow sprinkled with some white flowers. Off we went, and on our way we came across some nests with the eggs and the chicks wandering around. The eggs belong to different species of the gulls. Later I googled ‘seagull eggs’, and was shocked as all the pages that came up were related to cooking and eating these eggs!

Most of the seagulls lay three eggs. One must be stolen from the nest. 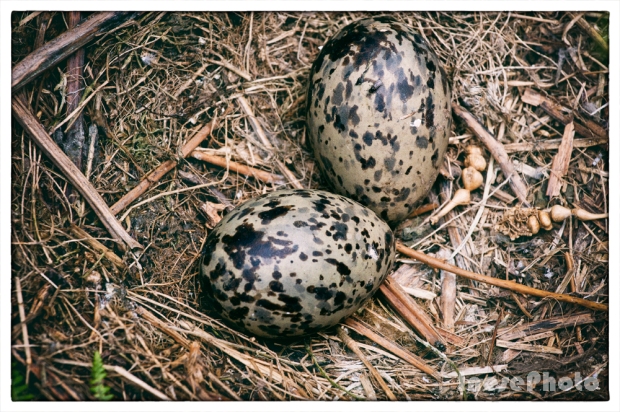 These are the eggs of a Great Black-backed gull. The pair of them is nesting in exactly the same place as last year. You can enlarge the picture to see the chick use its egg tooth to break through the egg shell. It might take 24 hours or even longer.

This speckled blue eggshell is quite big which means that it belongs to a seagull.

A chick is hiding in the weeds and playing dead.

After that, our detour took a bad turn, literally. We turned to the East and gradually entered the area covered with the ferns. In the beginning we managed to keep to the frail path but it led us nowhere. The seagulls hated us. Then the thorns and brambles came into the picture, and the path completely disappeared. My companions suggested that we keep moving along the coast no matter what, but the green sea of ferns might hide dangerous holes and who knows what else – I didn’t want to dive in it again. 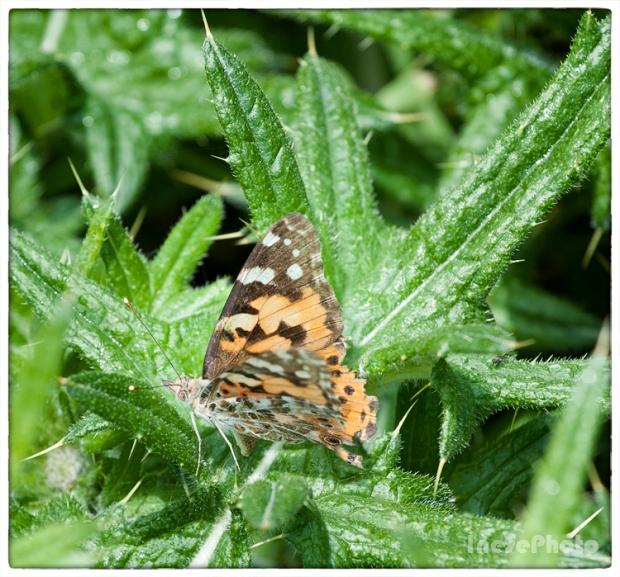 We were right in the middle of the green area in the picture below. If you zoom it, you will see a stone wall crossing the island, with the seagulls perched on top of it. I suggested we walk to the wall, climb on it, and walk on top of the wall until we reach a surface free of vegetation. So we did. The wall wasn’t flat on top, of course. The rocks were sharp and slippy, I fell, and my backside stuck between the rocks like a keystone. If I were alone I would cry. Thankfully, I was lifted up and put on the straight and narrow again. After a while we reached the main path and thus escaped being consumed by ferns. Lesson learned – keep to the main path because there is no other.

Beautiful weather had changed and the drizzle started to thicken. Suddenly the dark clouds opened in the middle revealing a perfect rectangle. Was it some sort of a message?

Another surprise – two pairs of ringed pigeons. How did they make it to the island? 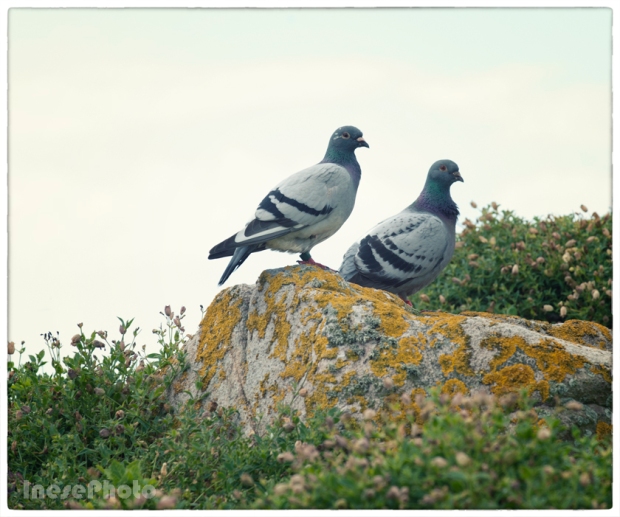 On our way to the boat we returned to the Puffin cliffs. 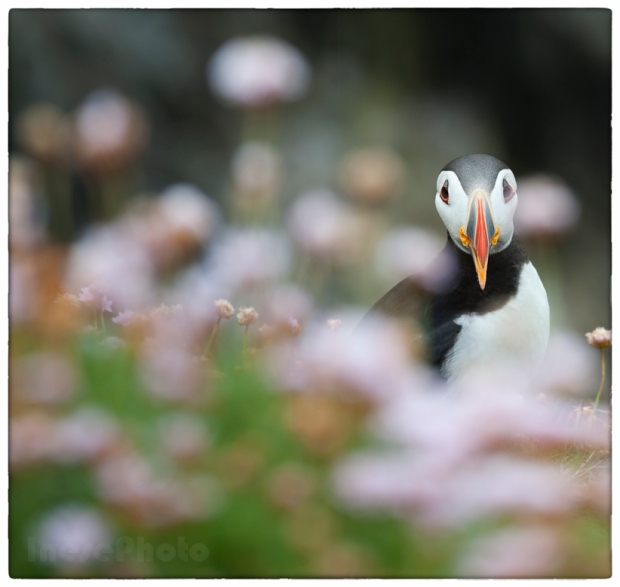 Thank you for sharing the dangers of this trip with me! The last blog about Saltee Islands is coming next Saturday! 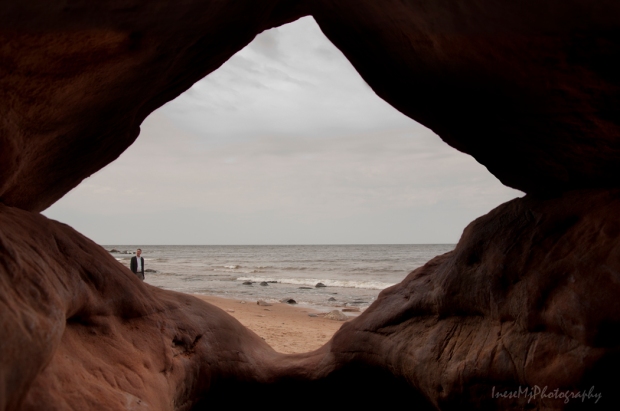 In this picture, I am looking through the natural ‘window’ from a coastal cave. It was chilly outside, and we quite enjoyed our refuge from the elements.

A couple of days ago I went outside first time after a week in bed. It felt like leaving a cave.

Viruses, the tiny things that are not even technically alive, can cause a lot of trouble. The only criteria for being alive they fit in is that they can evolve over time. It is why we need to get a flu vaccine every year. Basically, a virus is a string of DNA (or RNA) wrapped in a protein coat. It doesn’t respond to any stimuli and doesn’t reproduce. It just is. At this stage it is called a virion. The horror story begins when such virion gets in contact with a cell – human, animal or bacterial. Viruses are parasites, they must have a host. The host cell will produce proteins and do the replication for the virus. Some viruses leave the host cell alive, not using its full capacity. Some viral replications cause all the hosts biochemical processes to stop, and the cell will die after the viral replication is finished.

They say that there is a virus for every organism.

The best we can do after we get struck by a virus, is to drink fluids and stay in bed. And I mean it. Complications of viral infections can cause severe illness and death. As most of you, I didn’t believe that anything bad can happen to me after a simple viral infection, but it did, three times. Only a fool doesn’t learn after getting in trouble three times.

In July 1979 I got a viral infection but didn’t stay at home. I should have known better, because I got a life threatening condition after a flu in 1977, but I just started a new job! I was dragging my body to work a whole week until my growing headache forced me to call an ambulance. Our country hospital was 40km away. By the time the ambulance arrived I was only able to tell my name. I don’t have any memory of my first days in the hospital. I have got a severe viral meningitis.  Unable to stabilize my condition, the doctors decided to transport me to the capital. I heard a nurse arguing and refusing to accompany me. She was motion-sick and she shouted that she didn’t want to be responsible if I die. Off we went. I was all right but we had to stop a few times for the nurse. My stay in the hospital, all the people I met, all the stories I heard, could make a book if I were a writer. If you haven’t read Cancer Ward by Russian author Aleksandr Solzhenitsyn, give it a try.

I spent three months in the hospital. On some stage, I was immobile and had to learn to walk again. The man I loved abandoned me. A friend came over, just for a couple of hours. She had to change planes three times to get to see me over the weekend. After she left I decided to live.

I was back home in October. After a month, I went to visit my friend, and the 1979 made another attempt to kill me 🙂

There is an anti-viral medicine Rimantadine Hydrochloride, that was patented in 1965 in the USA. At about the same time, a group of scientists from Olainfarm company in Latvia worked with the chemical and came up with a similar drug, but with a slightly different formula, which explains the difference in administration of the drug. This one is fantastic, and the name is Remantadin. Originally it was created to fight tick-borne encephalitis (TBE), but it is great when used in early stages of any viral infection.

And because I mentioned Latvia, there are some photographs for you to look through. Next two blogs are dedicated to Latvia, because I am going on holidays, and I will be busy. I was lucky to spend two months in Latvia in 2013, but some photographs are taken in 2009. If you haven’t been in the Baltic states, I hope these posts will entertain you. 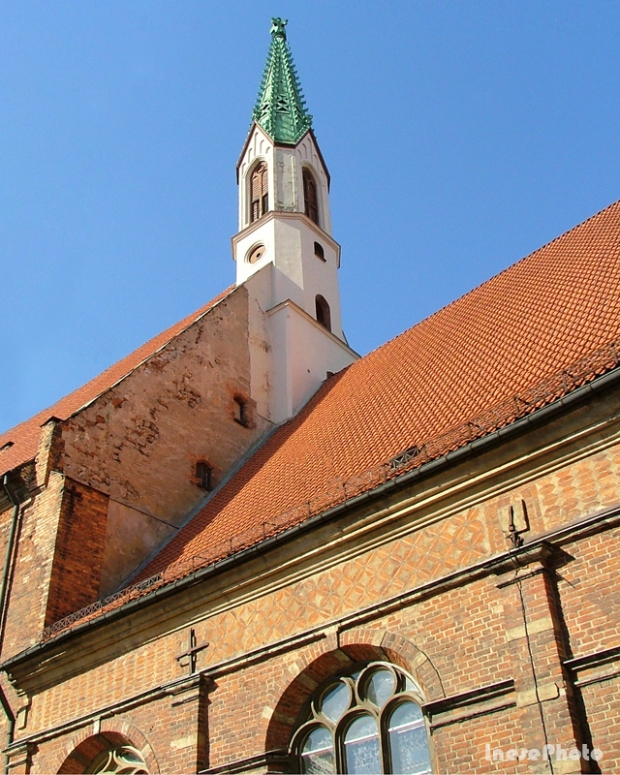 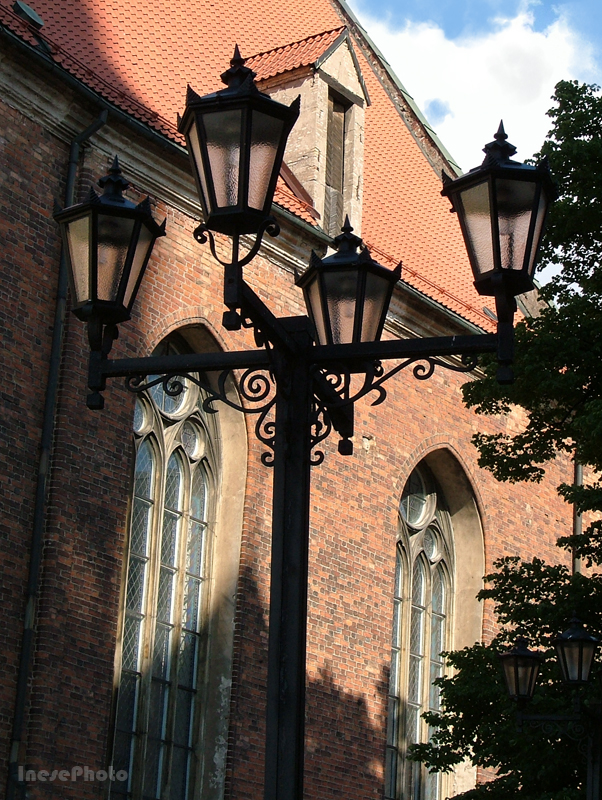 This is real amber. You can pick it up after the stormy weather. Just like that 🙂

A stork! My favorite bird.

Two pictures from an evening walk in Grobin town. It is the lake surrounding the ruins of a 13th century castle. 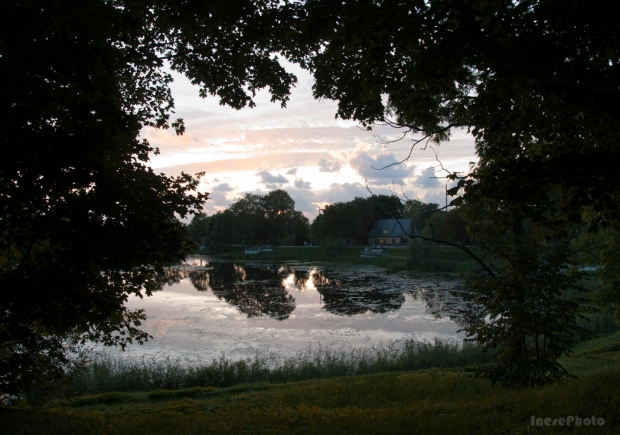 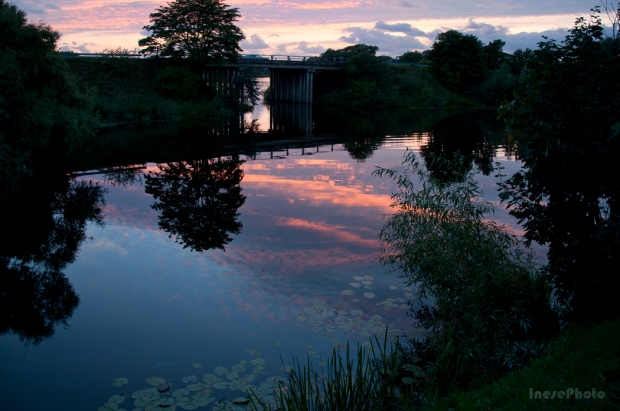 Hope you take my story about viruses seriously. Stay well!