This spring, I got a word that Minnie, the six-years old vixen,  was pregnant. The only “suspect” was a two-year old male fox Henry, badly mauled by dogs in his yearly days and restored to health in Pat’s care. Being very busy at that time, I didn’t come over to greet the cub and take pictures. I feel sad about that – I don’t think I will have another chance.  Now the cub is gone. Pat has too much on his hands  to accommodate one more fox, and a lady from Kilkenny was happy to give the little foxy a family and a little kit for a sibling to  grow together. I only hope for an interview in near future. 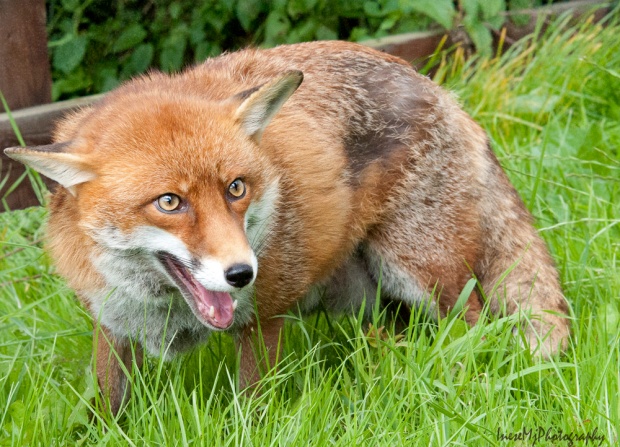 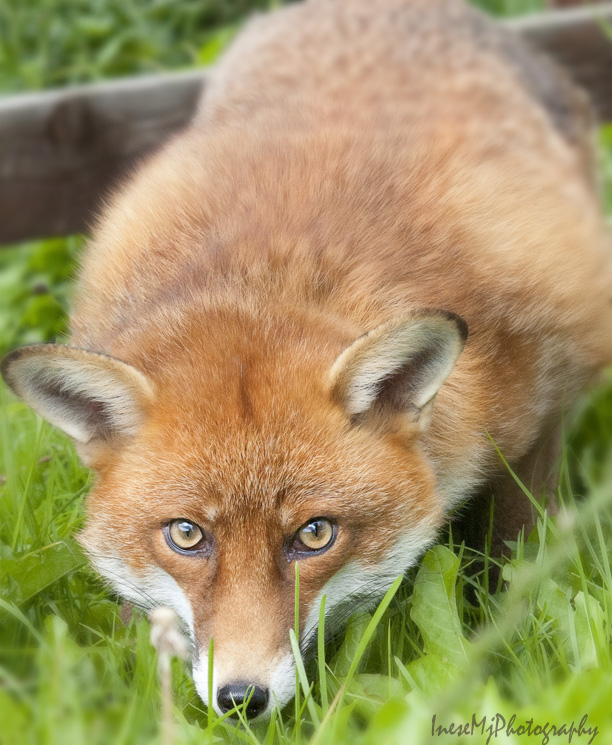 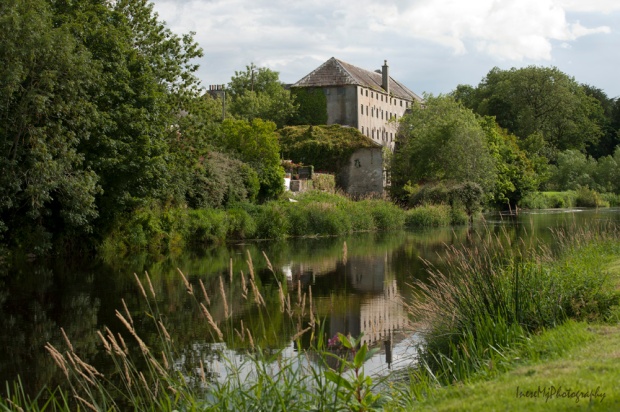 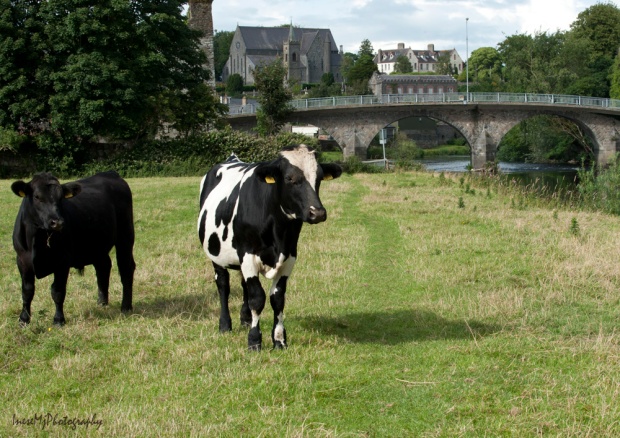 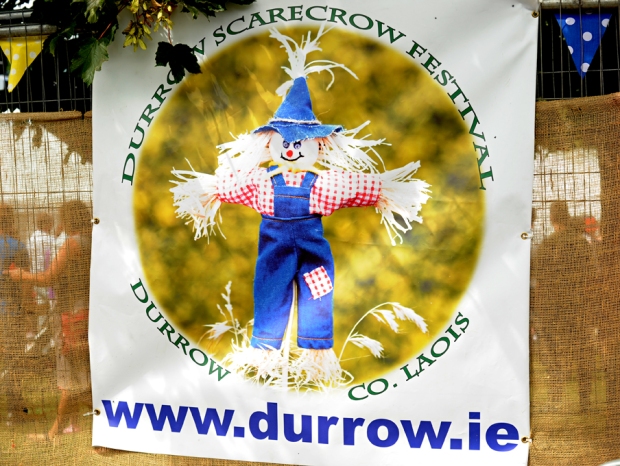 Beautiful village of Durrow, Co Laois are hosting their annual Scarecrow Festival this week. It officially opened last Sunday afternoon, but a fantastic job of preparation and scarecrow making started long before the day. Colorful and happy looking scarecrows sitting on the perches, trees or simply on the ground follow you on your way through the village and promise a good time and lots of fun.

Oh, even the President and the First Lady are… wait… never mind…

The Scarecrow glorified by L. Frank Baum is one of the most loved characters in children’s literature. He is gentle and kind, honest and wise. Seeking to get a set of brains he still appreciates the straw he is stuffed with, and his logic is unbeatable:

I will try to not do an awful lot of talking. The pictures will talk by themselves. 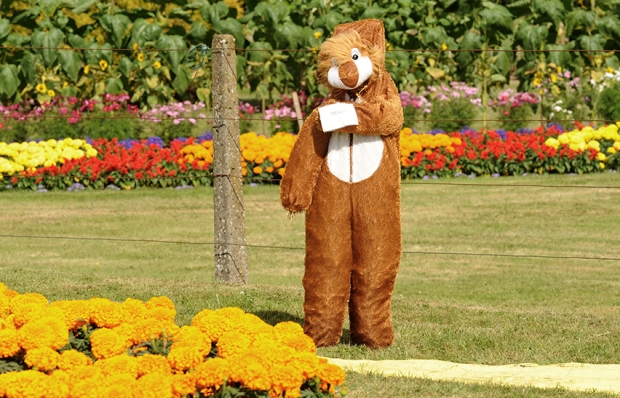 Who is the famous Scarecrow’s of Oz predecessor? It must be a Feathertop, the main character of the short story of the same name by Nathaniel Hawthorne,  first published in 1852. It is an almost Kafka-esque, thought-provoking story. 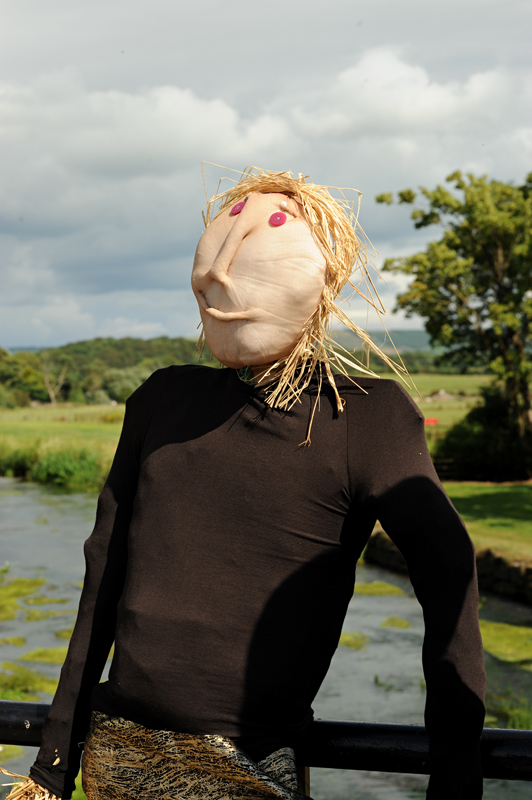 There is a long forgotten, but nevertheless brilliant movie Scarecrow (1983) directed by Jerry Schatzberg. It is a drama starring Gene Hackman and Al Pacino.  I was sure there is a comedy related to scarecrows, and  I did find a 1920 short comedy The Scarecrow. You can watch it here on Youtube it is just a few minutes of laugh 🙂

When did scarecrows become the horror icons? Some say that it all started with the 1981 horror mystery thriller Dark Night of the Scarecrow, directed by Frank De Felitta. I haven’t seen the movie, and to be honest, I haven’t seen ANY scarecrow horror movie. I would be terrified, I hate creepy things like murderous clowns and scarecrows. I’d better stay with this cute Snow White 🙂

There is so much to see in Durrow this week. Humans are watching the scarecrows ( you never know…) and…

There is even a local war going on!

Cowardly Lion: Come on, get up and fight, ya shivering junkyard! Put your hands up, ya lopsided bag o’ hay!
Scarecrow: Now that’s getting personal, Lion! 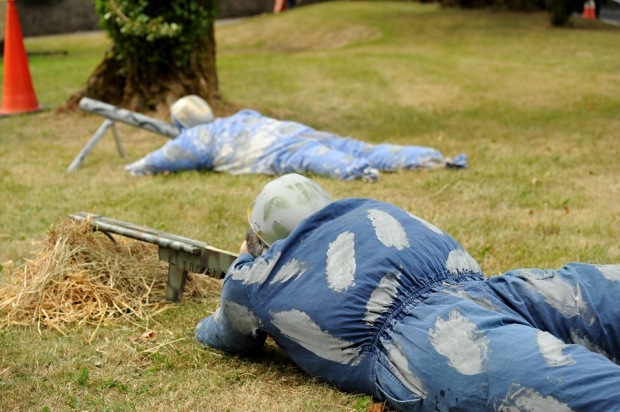 Children are actually very quiet here. I cannot blame them: the real and the surreal are tangled and unclear 🙂

Watching the performance I thought  I would take a picture of these fire red hair owners.

Suddenly all three of them turned back 🙂

I want to share a short fun video courtesy of Hattie Wilcox (the video is on this page of her website). It is filmed in Ireland, it is about the scarecrows, so it is quite relevant.

Hattie Wilcox is a terrifically talented composer, singer, poet, songwriter, photographer, and most humble and hard working  person. Please check out her website and blog.

Photography tip of the day: Use the White balance feature of your camera. Take pictures with different settings and chose the result you are happy with.

Looking into the viewfinder I spotted a tiny bird flitting about in the waist-high vegetation before it landed on top of the cement pole. 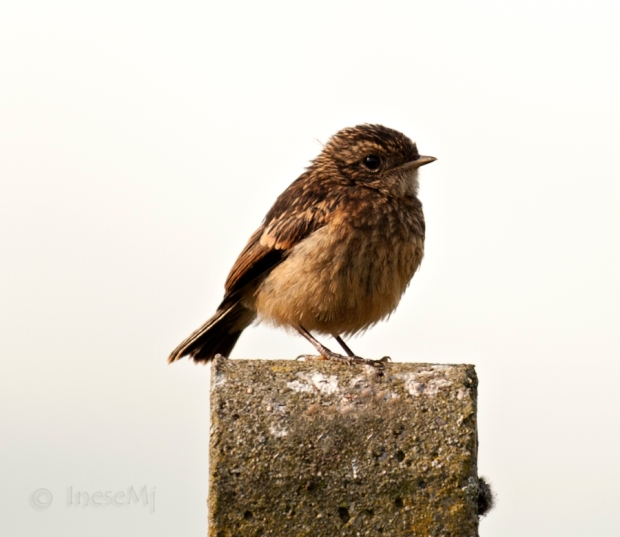 The bird looked like a young female, and later I learned it was a European stonechat. It was flipping from one pole to another, and finally settled so I could take these pictures. After about a minute of chirping there came a male stonechat. 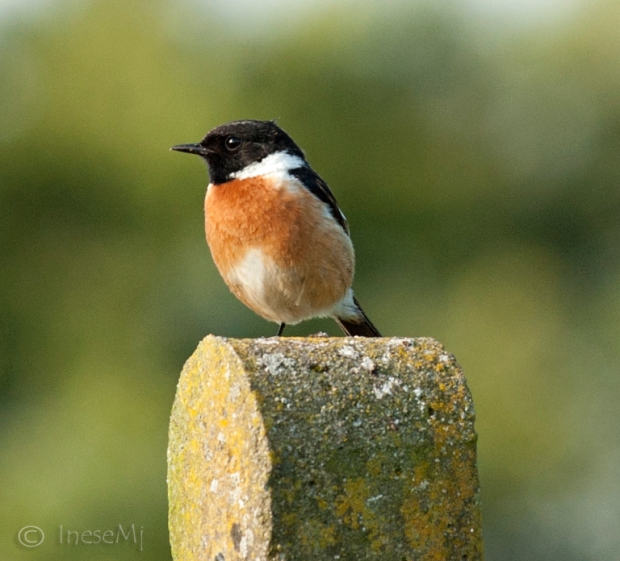 I don’t know if they were a couple; they rather looked like a dad and a teenage daughter. 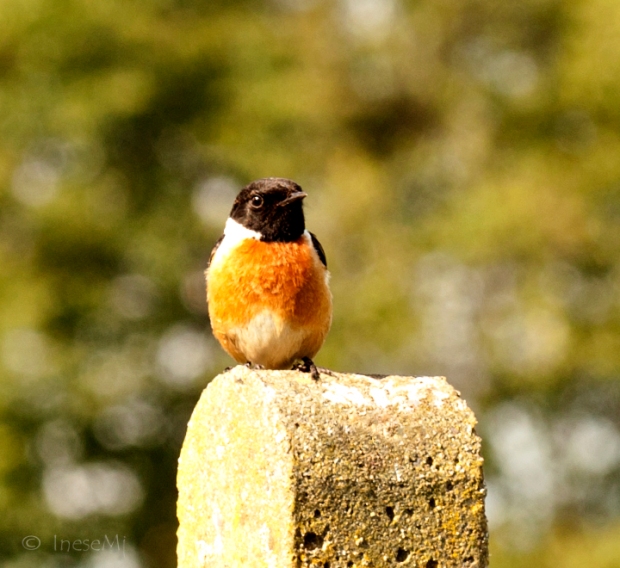 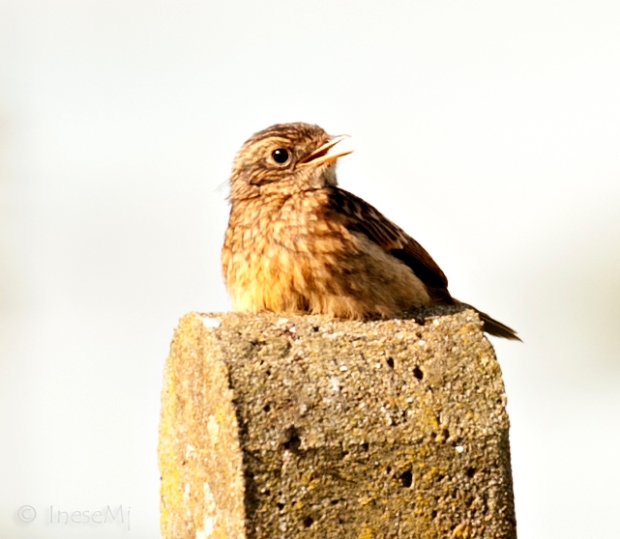 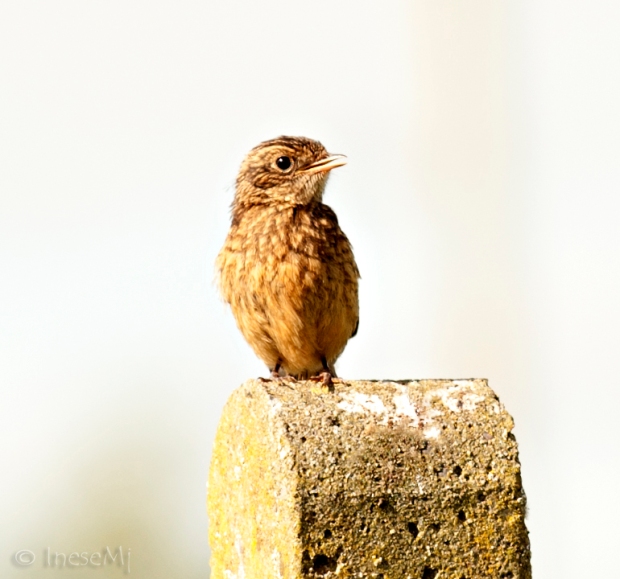 Your pole looks nicer. Can I come over?

No way. Stay where you are! 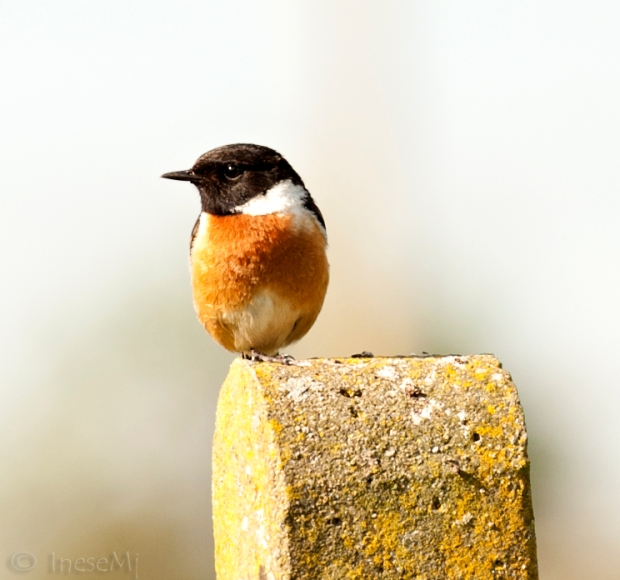 Didn’t you hear me? Don’t even try!

But she already took off and landed almost on top of his head.

I walked about a mile and sat on a bench to rest and enjoy the evening light. A Grey heron was standing in the middle of the river, quiet and patient skinny bird looking grave and funny at the same time. I thought I might stay and wait for him to catch a fish.

No such luck. He changes position, striking at imaginary prey. 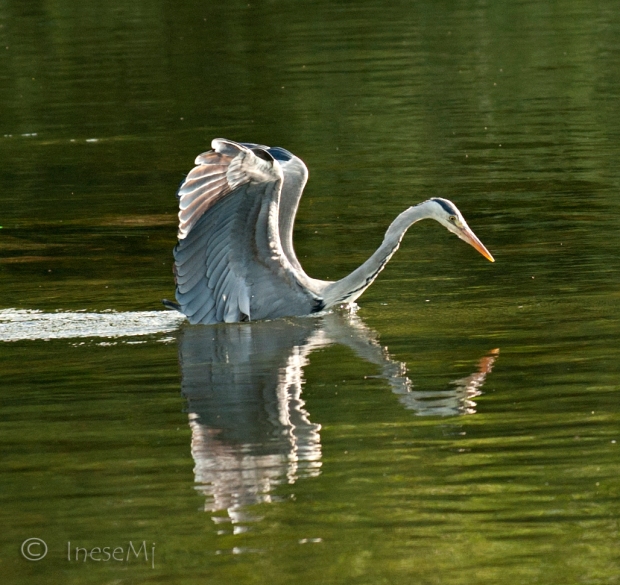 Maintaining his dignity he takes off and departs. So do I. 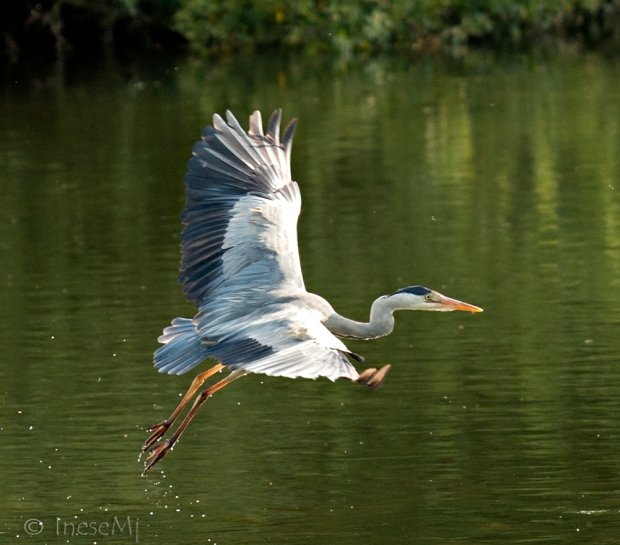 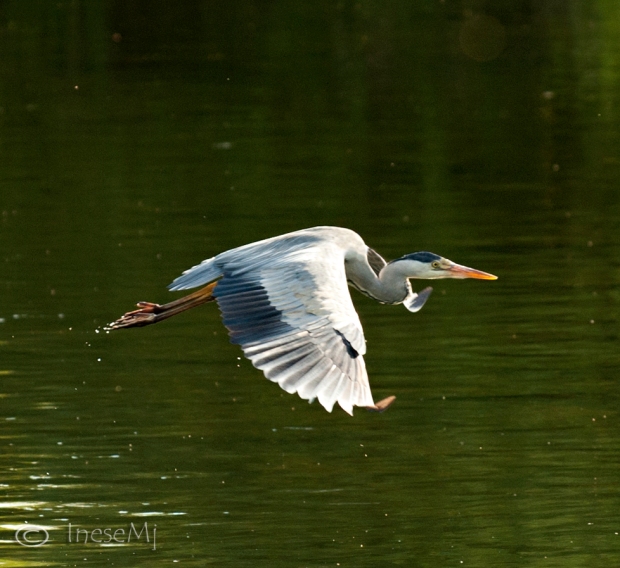 Another half an hour back to the parking lot. Stress management: accomplished 🙂

A blogger friend Aquileana, inspiring mythology expert and a lovely person has nominated me for a Versatile blogger award. I am very honored and grateful for the nomination, especially from Aquileana who is such a great example of knowledge and personal charisma.

Here are the Award Rules:

1) The nominee shall display the Versatile blogger Award logo on her/his blog.

2) The nominee shall nominate ten (10)  bloggers she/he admires, by linking to their blogs and informing them about it.

Here are the bloggers I nominate for this award. Please visit their blogs!

Photography tip of the day: There is a link to the page where professional photographers share their advice. I have noticed ( and not only in this article) that the younger photographers often use the word “confidence” . Their older colleagues don’t seem to care:)