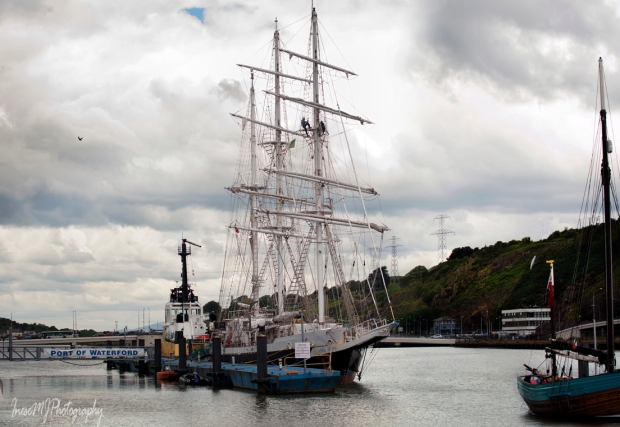 Last Friday, while walking along the river, I was very pleased to see Lord Nelson berthed near the bridge. At home, I went through the old pictures and decided to put up a blog about the tall ships – for a change.

A mile long Waterford Quay was packed in 2005. It was the most colourful festival Waterford had ever seen. A whole fleet of ships were berthed on both sides of the river, and it was quite a hike to get around all the people queuing to board and receive a stamp in their souvenir passport. Some ships were docked by two, and the crew members from the outside vessel had to walk through the other vessel to get to town. This also made photographing difficult. Besides, the weather was not great for photography with just a few sunny spells in five days.

Ireland was represented by three ships. This is a famine ship replica Jeanie Johnston.

The other replica famine ship is Dunbrody. You can visit her in New Ross, just 15 minutes drive from Waterford city. Patrick Kennedy, JFK’s great-grandfather, set off to America from the New Ross quays in 1848. 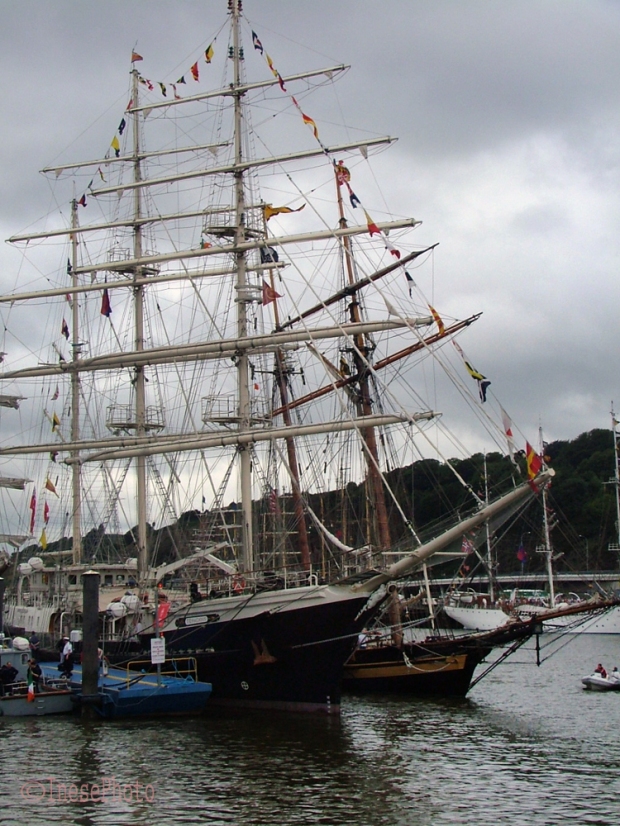 As the focus of the races is on training, at least 50% of any crew has to be between 15 and 25 years old, but of course there are some much older trainees, and also trainees with disabilities. The SV Tenacious is a British wooden sail training ship, specially designed to accommodate people of all physical abilities to sail side by side as equals.

This is the figurehead of SV Tenacious.

Not being able to swim a full lap in the local swimming pool, I love all things water and can successfully navigate a paddle boat. I have been on Stena Line ferries, but there is nothing like standing on a sail ship and looking out at the water ahead. 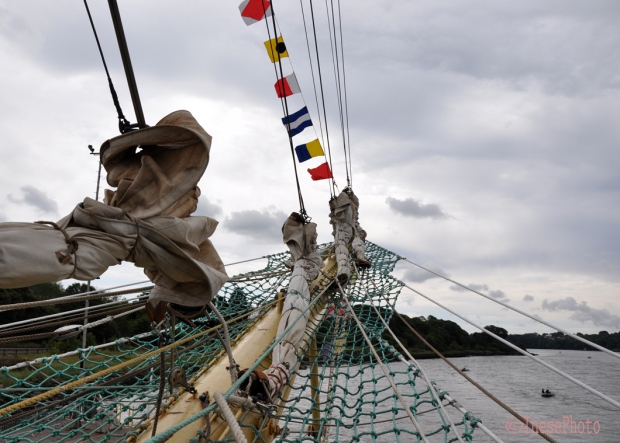 This young cadet is barely sixteen. Hope he has a successful career. 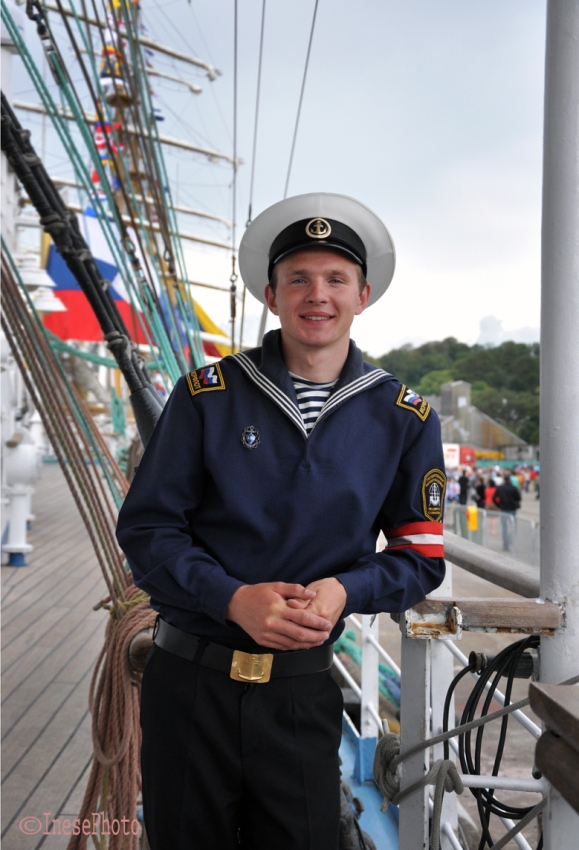 I checked the tracker – Mir is currently taking part in the races. Wishing them best of luck!

Another legend  – the barque Eagle, formerly Horst Wessel, one of four sailing ships that were distributed by drawing of lots with the allies after the end of the World War II. A smaller vessel with the colourful sails is a three-masted schooner of the Uruguayan Navy – Capitan Miranda.

Magnificent Sagres, a school ship of the Portuguese Navy has a long history. Indonesian three-masted barquentine Dewaruci moored behind her was ‘adopted’ by Waterford city following the devastating earthquake and tsunami in 2004. 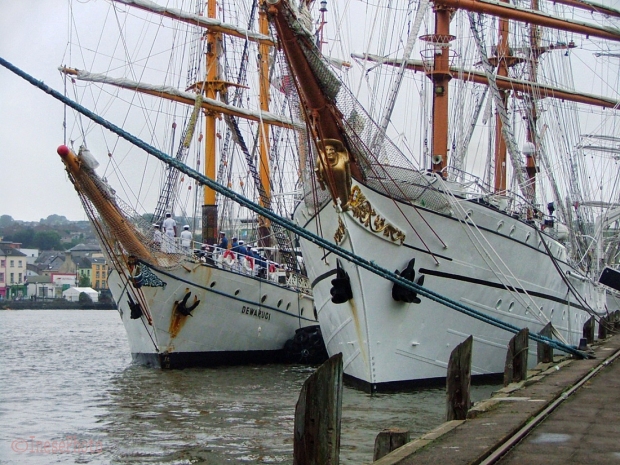 A young sailor from Sagres. 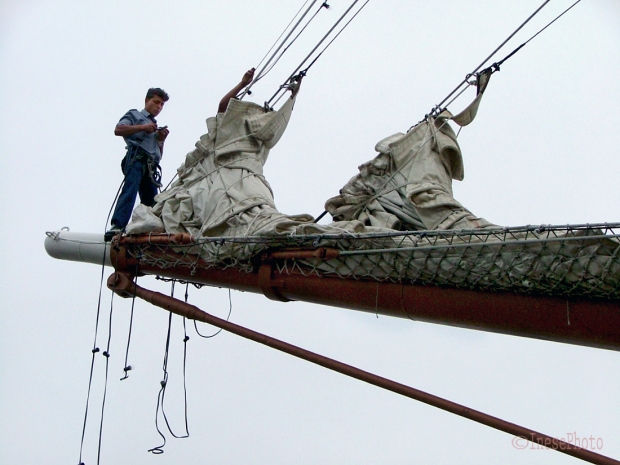 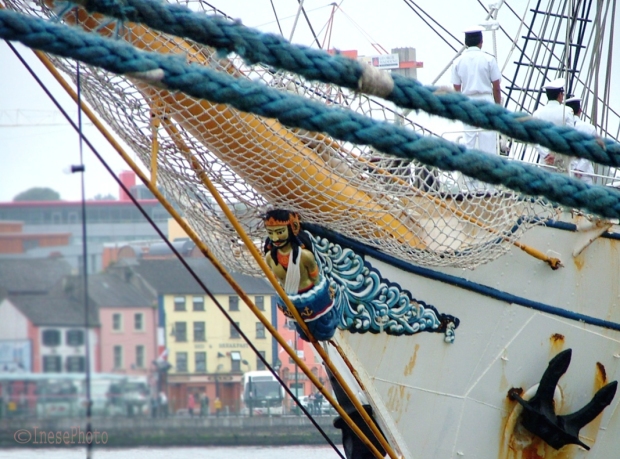 It was so sad to see Dewaruci leave the quays. The dancing crew gave their last performance which was truly spectacular.

Another friendly and fun crew that left fond memories were the young sailors from the Omani Royal Navy barquentine Shabab Oman, which can be translated as Youth of Oman.

Originally named the Captain Scott, the ship was built as a schooner, and refitted as a barquentine after she was sold to Sultan of Oman. She is constructed of wood and looks charming. In 2014 she was replaced with a new ship of the same name and remains moored at the Royal Navy base in Oman. I wish I took more pictures… 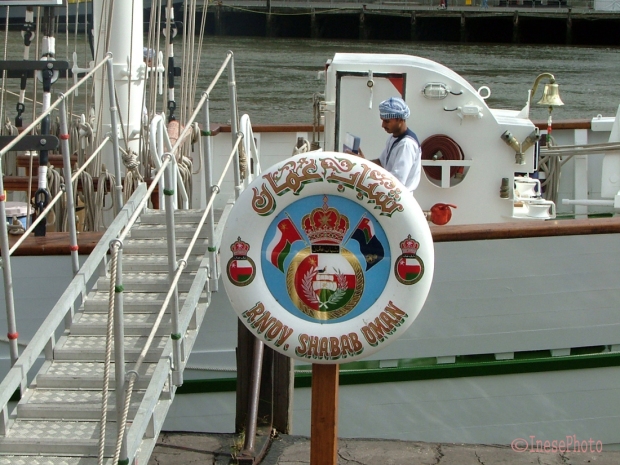 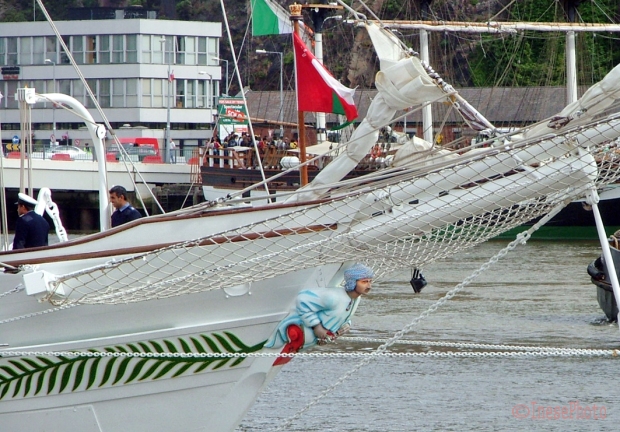 The weather was perfect when we came to Waterford for a day in 2011. I was delighted to take pictures of Norwegian Sørlandet, the world’s oldest full rigged ship still in operation. 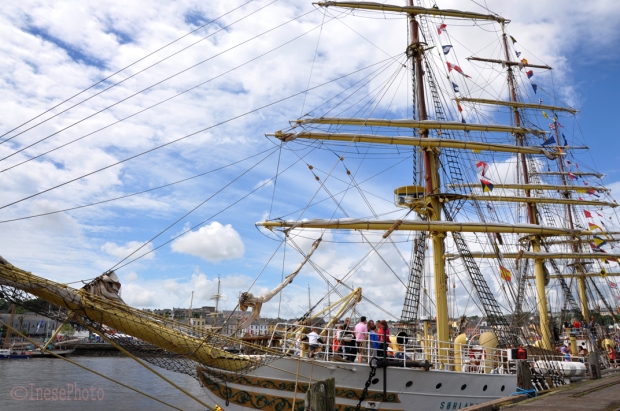 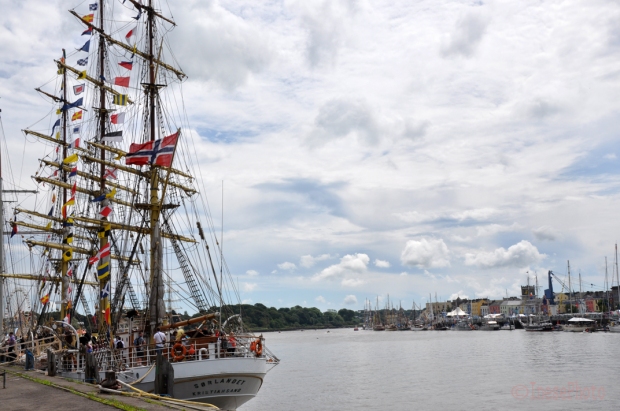 Magnificent Europa, a three-mast barque registered in the Netherlands, was originally built in 1911, but there was little left of her when a Dutchman bought her from Germany in 1985. She was fully restored, and what a beauty she is!

Another beautiful ship from the Netherlands, Eendracht. She is Holland’s largest three-masted shooner designed for training young and inexperienced sailors.

Gorgeous figurehead of Christian Radich, a Norwegian full-rigged ship, has a blush on her cheeks, probably because of the fresh breeze. Christian Radich is a remarkable ship – she took part in the very first races in 1956, and came the second. Merchant and captain, Radich died in 1889 and left 90,000 Norwegian kroner to build a training ship. The current Christian Radich is the fourth ship to carry the name. 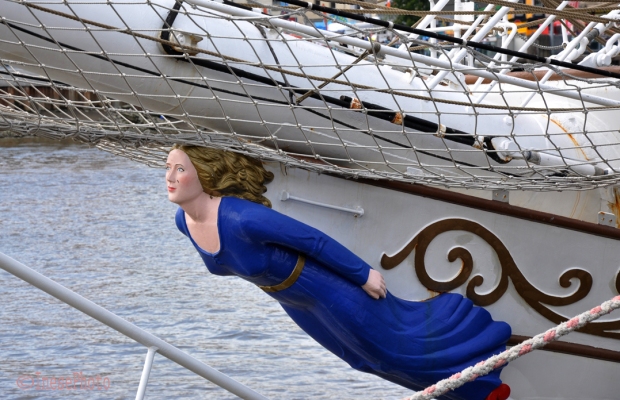 My young friend and I visited Colombian three-masted barque Gloria, and took a ton of pictures with the crew.

We also took some pictures of the interior.

This is the figurehead of Gloria. 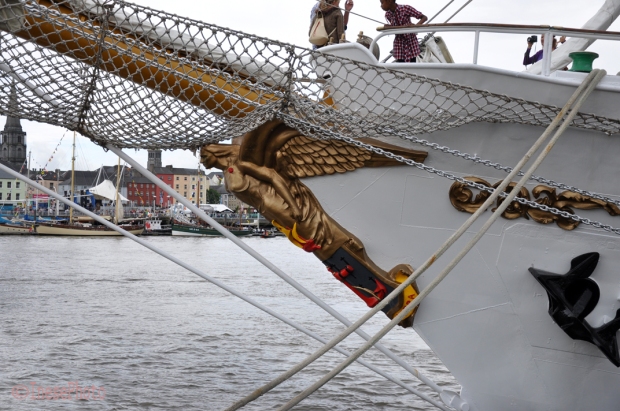 Russian four-masted barque Kruzenshtern, (length 114.4 m, or 375 ft) was built in 1926 in Germany as Padua, and given to the Soviet Union as war reparation. I was very surprised to see her in Waterford in 2005, because I wouldn’t imagine this kind of ship fit in our river. It was amazing. Unfortunately, I didn’t have a chance to get aboard, only had a small chat with two young cadets.

I did want to know the purpose of those ‘cats’, and learned that these are the guards preventing the rats from walking up the mooring lines and getting on board.

Amazing job done by our tugboats! 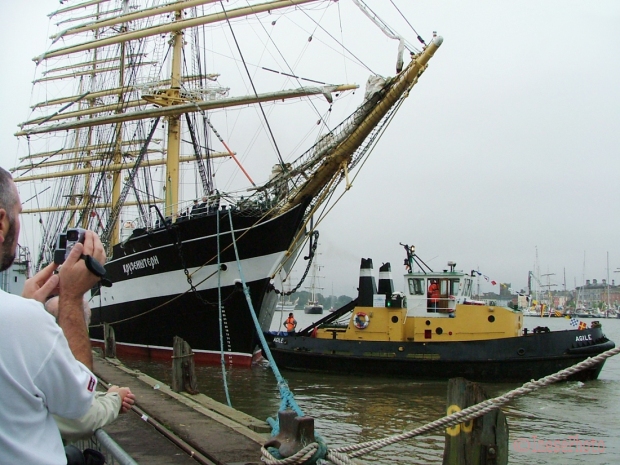 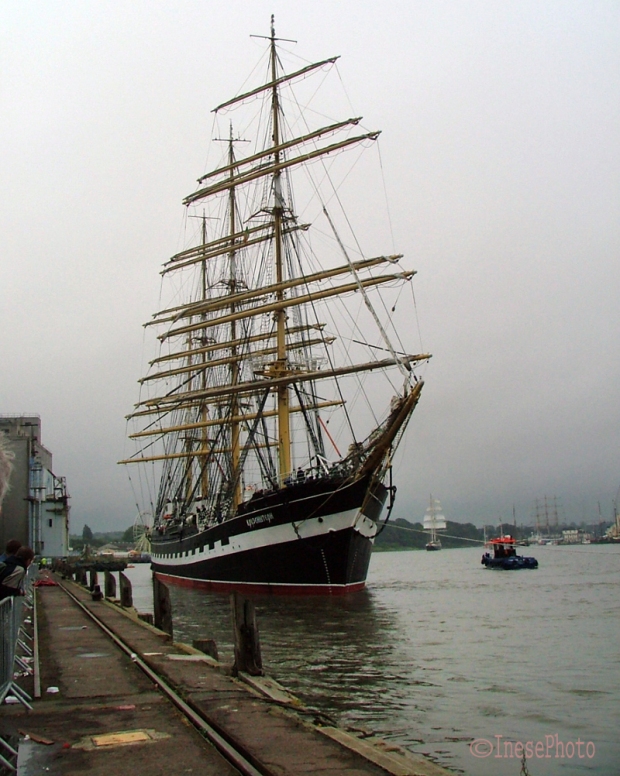 The tall ships set off to Cherbourg.

I want to share a 2005 video. It is very imperfect and long, but it gives you a unique chance to see the tall ships sail out of the Waterford harbour. It wasn’t a good day for sailing since there was no wind at all and the race had to be delayed. The video begins with an interview with a person from the Kruzenshtern – the guy you see in my picture. There was another nice video, but I decided against it because of the Titanic theme they used 🙂 Not the best choice I would say.

Thank you for reading!