I was watching this video on a vintage TV set for the first time in my life. The Visitor Centre at the Kennedy Homestead was reopened in June 2013, fifty years after the President John F. Kennedy’s visit to Ireland in June 1963, and this TV set and the tea cups belong to the era. A cup of tea, salmon sandwiches, and a huge cake – it is what his cousin Mrs. Ryan, with the help of her neighbors, cooked for the occasion. President Kennedy was accompanied by his sisters Eunice and Jean, and they met fifteen of their Irish cousins! In the picture below you see Patrick Grennan, Mrs. Ryan’s grandson. He is a curator of the Kennedy Homestead, the birthplace of their ancestor Patrick Kennedy, a great-grandfather of the President.

It was the second day of his four day tour when the President traveled by helicopter to Mary Ryan’s farm in Dunganstown, Co Wexford. He had been there before. In 1947, he came to Ireland to visit his sister Kathleen who was staying at Lismore Castle. Kennedy and the other guests borrowed a station wagon and went looking for his relatives in Dunganstown. That is  how he met his third cousins for the first time. He said that his visit was ‘filled with magic’.

Patrick Kennedy emigrated in 1848 – being the third son, he had no chance of running the family farm. More than a century later, in his speech at the quay in New Ross from where his great grandfather left for America, JFK joked that if his great grandfather hadn’t emigrated, he himself might now be working for the Albatross fertilizer Company, or perhaps for John V. Kelly shop down the road.

The Kennedy Homestead museum has a unique collection of the Kennedy family’s artifacts including the rosary beads that was in the President John F. Kennedy’s pocket when he was assassinated in Dallas. Jacqueline Kennedy brought her children to visit and gave the rosary beads to Mary Ann, the late President’s cousin and Patrick Grennan’s aunt.

Exposition also includes documents, photographs, audio-visual display, and plenty of space to walk around and contemplate.

This dress is a replica of a simple linen dress Jacqueline Kennedy wore for her official White House portrait that was painted in 1970 by Aaron Shikler. The dress was made by the Irish designer Sybil Connolly.

The astronaut spacesuit is a replica of the spacesuit worn by John Glenn during project Mercury, the first US manned space program. 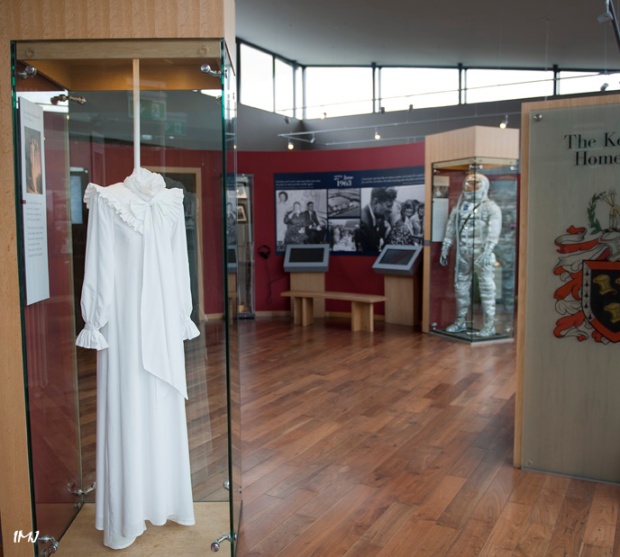 I was told that decorative rugs, like this one, were popular in the 1960s. The rug is a gift to the museum. 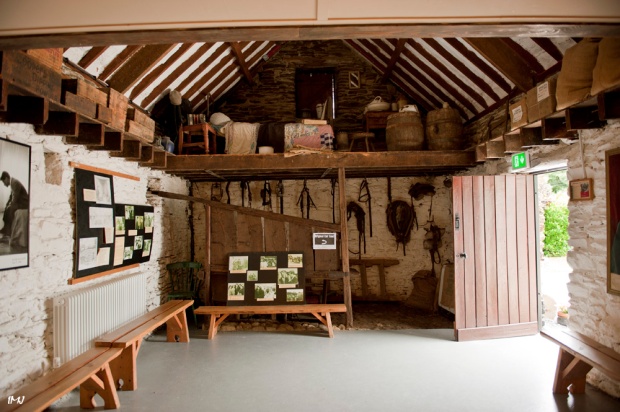 ‘I’ll be back in the springtime’  – these were the last words President Kennedy spoke before leaving. His ambition was to serve two terms as President and then appoint himself as Ambassador to Ireland. His sister Jean was to fulfill this ambition. She visited Kennedy Homestead as Ambassador on the 30th anniversary of his 1963 visit, in June 1993. Twenty years later, Caroline Kennedy, the President’s daughter, and Irish Prime Minister Enda Kenny opened this new Visitor Centre and Museum.

In 2004 I was in Kennedy Arboretum, and on the way back we stopped by the Homestead, but didn’t go in, so I just took some pictures from the road. The Arboretum is a unique place itself and some day I will go there again to write a blog post.

My personal connection with JFK? Definitely it is this picture with Patrick Grennan taken with assistance from two lovely ladies, Mary and Eimear… 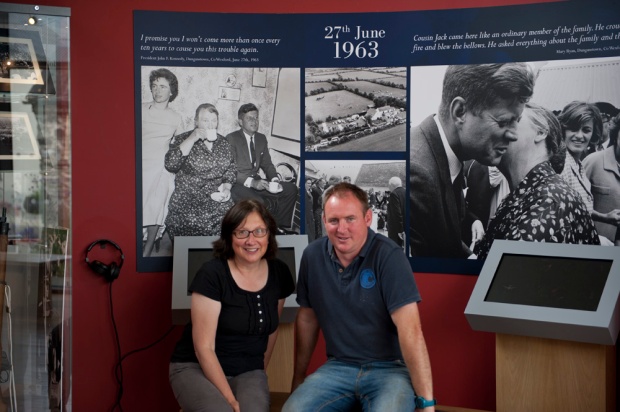 … and my smooth landing at JFK airport a few days later 🙂

Just a word about another two famous Americans with Irish roots whose ancestors were not that lucky, and their names are fading away from the old gravestones in the littered and overgrown Clonmelsh graveyard, Ballyloo, Co Carlow.

Pierce Butler, one of the Founding Fathers, was born in Co Carlow, the 5th Baronet of Cloughgrenan, a younger son unable to inherit his family fortune. Butler joined the British Army and was sent to America, where eighteen years later he signed the American Constitution as a South Carolina’s representative to the Continental Congress and the Constitutional Convention in Philadelphia.

Many of his ancestors are lying here in Clonmelsh. 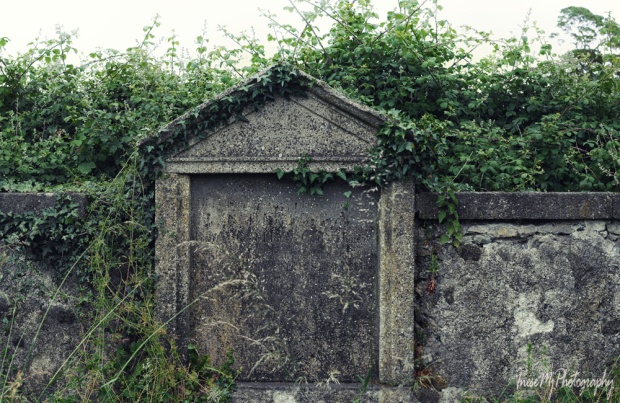 Walt Disney’s ancestors left Ireland to travel to New York in 1834, and now the Disney Corporation is worth billions. Three of his ancestors are buried in Clonmelsh graveyard, and the Council is cleaning rubbish in this ‘all star’ graveyard every six month just to keep it in presentable state.

There are many election-related blog posts published these days, some of them very hateful. I do care about this election, because it is a big deal globally, but I don’t see how a blog post that is spitting hate can actually help. So, I just want to finish with a quote I copied from Facebook. I do respect this man who has never forgotten his roots, who loved the land of his ancestors and left a legacy of identity to his children, and a legacy of hope for his country. Don’t get me wrong though. I know that John Fitzgerald Kennedy was just a man, as imperfect as a man can be, but do you realise that there is no perfect man who would come and clean up our mess. So, why not to listen to the words of this redhead President that make so much sense? He had inherited Cuba, Vietnam, and Civil Rights problems, something one cannot resolve overnight, but he had started working on that, and there was progress, there was improvement, one step at a time, and it is how it works. One tiny step at a time. Those who promise a quick solution, lie. Only step by step, without trying to fix the past, but with aspiration to build the future.

Thank you for reading!