Spraoi 2019 hit the streets. Most of people are merry, but not the Morbid family. Business is dead! People are too fit and healthy, they are not dying any more! Family is struggling.

The son is starving! 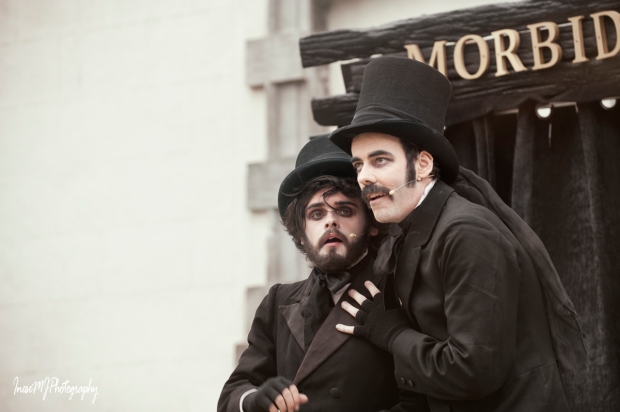 The last chance would be to open a pop up funeral shop and offer a funeral demo with the slogan “Buy now, die later”.

A school teacher Lisa got the privilege to demonstrate her best ‘dying face’. I think it is very impressive, and Lisa has secured a discount funeral with the Morbid & Sons for the future.

As always, I am amused by the reaction of those in the audience. The younger generation looks a little bit scared, and some are openly bored. What would they care of the discounted funerals, anyway 🙂 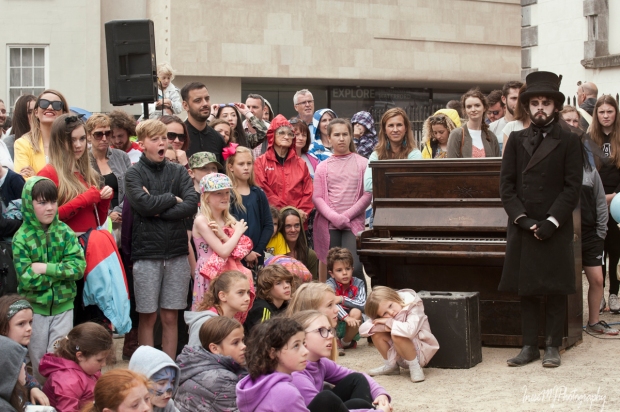 But the Morbid family look very hopeful. Teacher Lisa returns to the world of living with the promise of future ‘perks’, and another show – and a new customer – is just 15 minutes away. 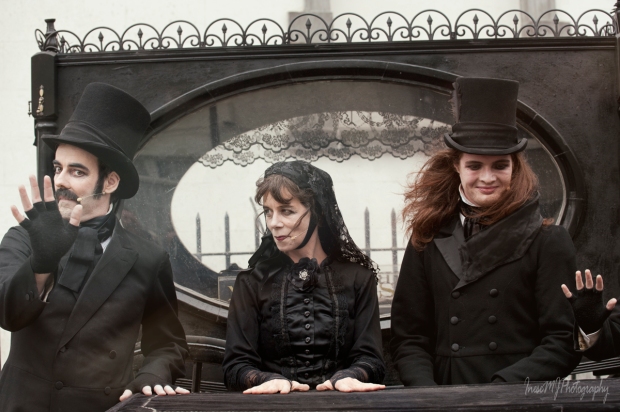 Old tunes and old jokes are fun and get a lot of applause. 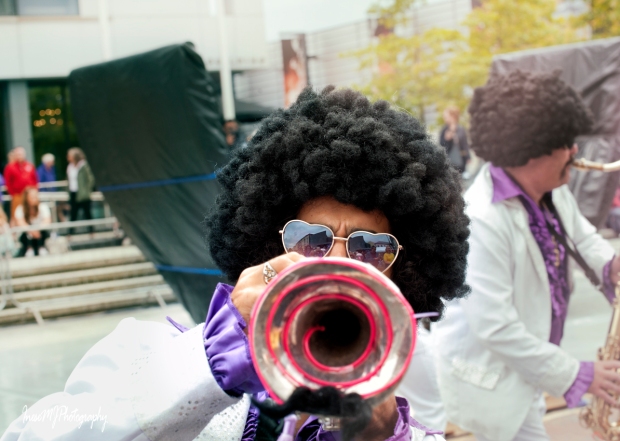 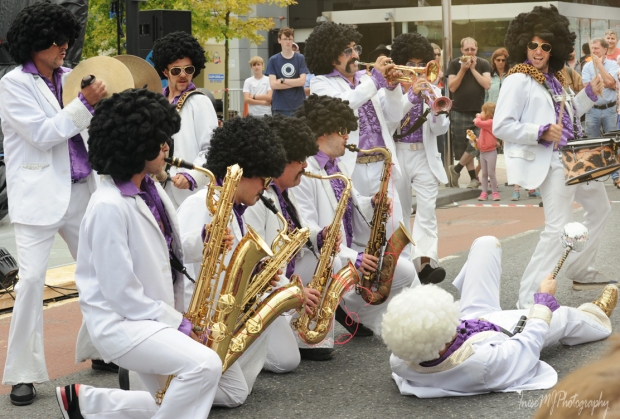 Unfortunately I didn’t have a chance to watch the Roaring Clubsters show from Berlin because of the huge crowd, but I caught a glimpse of the spectators, and, as always, watching the different reactions was very entertaining. 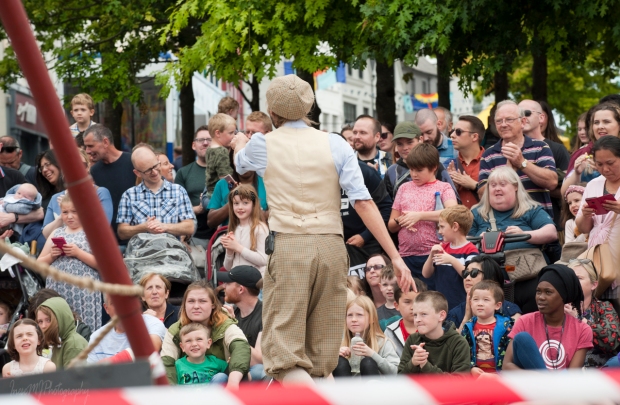 Now, this is something new. A Russian Baba Yaga is roaming the streets in her automated mortar, and her little cottage, Izbushka, is trailing behind on its chicken legs. A tag on the cottage states that it is for sale, but don’t believe what you see. Baba Yaga wants to look legal while hunting for children to cook them for dinner. The pack of salt tied to the mortar speaks volumes…

Checking for lice nits 🙂 She wants her food organic 🙂 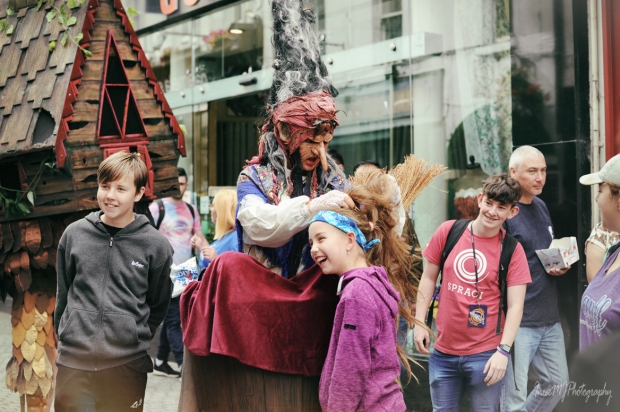 We wouldn’t wish her luck, would we? 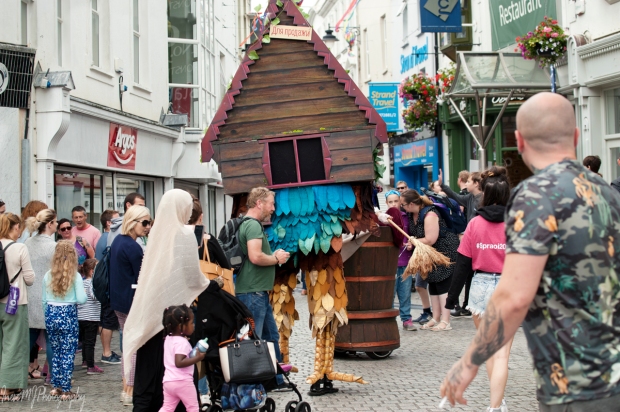 Charming show and a great music – the Los Rabinovich brothers from Mallorca! Musical clowns who don’t utter a word, but unite the hearts. 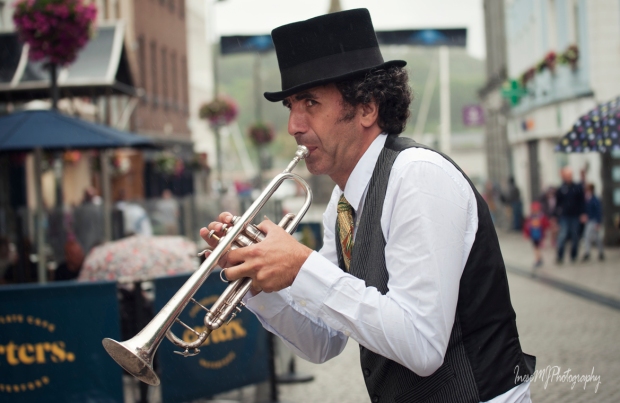 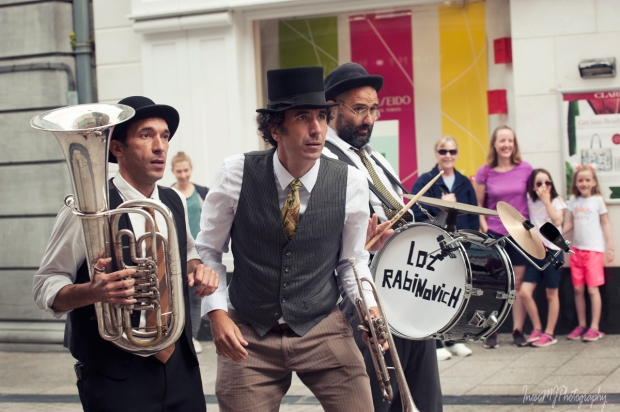 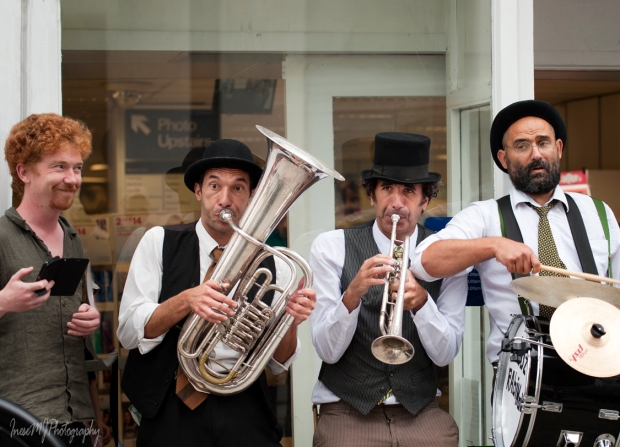 Even the rain didn’t stop the brave travelers. They are determined to stay in this city for the Bank holiday weekend and see what comes out of it.

There sits the Always Drinking marching band from Barcelona, very sober and focused: the show is about to start in a minute. The Spraoi brochure states that their name refers to the “Mediterranian way of life – socializing in the streets, hanging out with friends in the squares, having some beers and tapas”. Sounds much better than “sitting alone, staring at computer screen” to me.

Always Drinking productions is a company of musician, artists, clowns, jugglers – name it. The guys in yellow were the stars of the festival.

Mila von Chobiak, the actor, kept his finger on the pulse of the crowd. 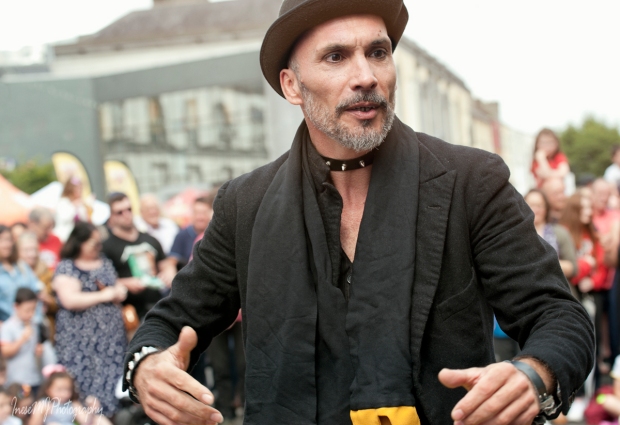 The show was seamless and very professional – they instantly grabbed their audience’s attention and held it to the end of the show.

It didn’t take long to make them all dance.

The band even auditioned a new conductor!

When the 30 minutes long show was over, the band played another extra 15 minutes! Brilliant band, I hope to watch their show again next year. They are so attuned to the spirit of the festival, because it is what Spraoi is about – to have fun together!

Thank you for visiting Waterford 🙂