Since my previous blog post was about Curraghmore, I thought I would share with you a very popular Beresford Ghost Story for upcoming Halloween. It came out, however, that I have no spooky ghastly photos of Curraghmore House.  I decided to write an illustrated introduction about another place just behind the wall from the Curraghmore estate – the Mayfield House, Portlaw, of which I have plenty of spooky looking pictures, and the most important, a spooky true story.

Since the ancient Rhododendron tree fell down during the hurricane Ophelia in autumn 2016, the only way to get to the Mayfield house is to crawl through under the tree trunk…

… which I did the following December ( when I was sure the trunk wouldn’t flatten me). Winter is the best time to see the house free of weeds and brambles. 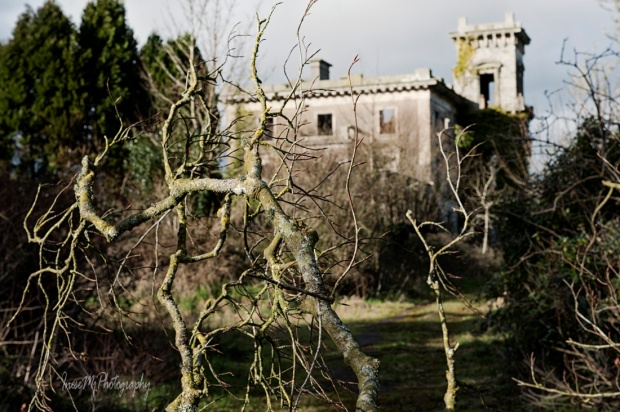 Mayfield House was built in the 1840s by William Tinsley for the brilliant entrepreneurs and philanthropists Malcolmsons who absolutely deserve a separate blog post.

The house also has a basement, and the tower was added in 1857. The house served as offices for the Tannery that opened in 1935, but as the Malcolmsons’ factory failed in the 1870s, so did the Tannery that was closed in 1985. Since then the house has been stripped of anything of worth, and now is a dangerous ruin.

It is still beautiful though. 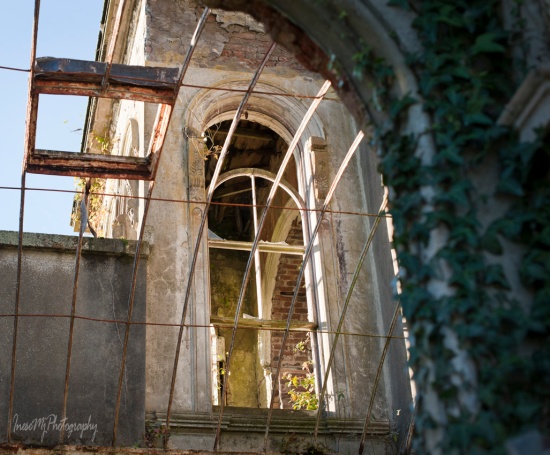 I walked around the house to take pictures of the Tannery’s chimney.

Suddenly I noticed a strange movement in the upper floor window. 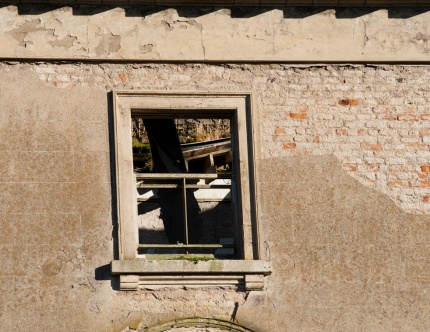 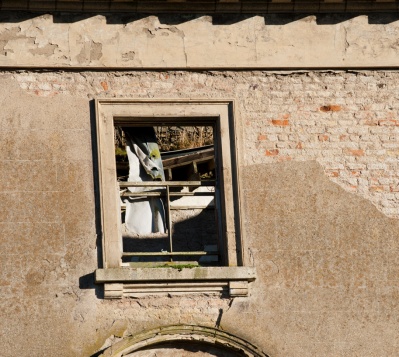 I quickly realised that it was just an old curtain swinging in the wind. Still, I thought it was a time to pack and leave.

Unfortunately, I can’t just leave, even when warned.

I made my way around a big pile of gravel to take a look at the back yard and a shed. 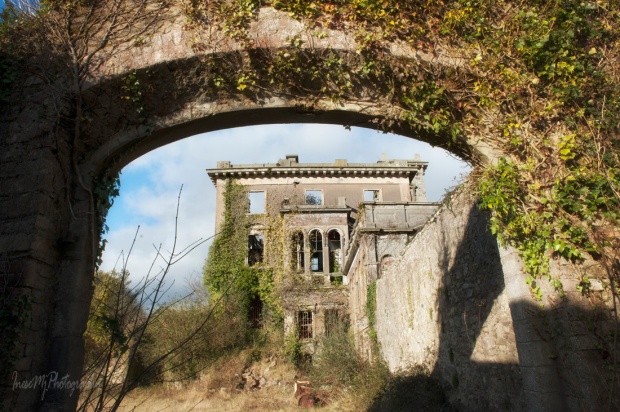 The shed has no doors, just two big holes in the wall. This is what I saw through the first hole. I didn’t like the chair, but well, there was no one sitting in that chair, right?

I walked to the other hole, and this is what I saw there. Nothing amusing. I was considering stepping inside the shed to check out bats when all of a sudden I felt a strong blow to my chest that stopped my heart and my breath. A physical blow.

The next moment I felt choking pressure on my throat. If it were from behind, I wouldn’t have any doubt I was being attacked ( and I would have a heart attack because of the scare) but here I saw no one. There was no one. The sensation lasted for just a couple of seconds and went away as suddenly as it came. ‘OK, OK’ I breathed out as soon as I composed myself and moved away from the shed. ‘I got it, I got it’.

When it was time to crawl under the tree trunk again, the ivy vines started to look like something from a horror movie… at least in my imagination 😉

I have never disturbed the ghost again, but I still go to the Mayfield House when the gate is open ( when the drifting takes place). No paranormal activity has ever been reported in this area. A nomadic ghost? May be. But read the Ghost Story – may be there is a clue 🙂

John Power and Nicola Sophia Hamilton were raised by the same guardians and formed a friendship that extended beyond the grave. While in the guardians care, the teenagers learned about different religions and started to have doubts about the afterlife. The two made a promise that whichever should die first, would try to return to the other and reveal the truth about the life after death.

When John was only seven, his father, Sir Richard, 1st Earl of Tyrone, engineered his formal marriage to the twelve years old heiress Catherine Fitzgerald who eloped when she was seventeen. Nicola married Sir Tristram Beresford, 3rd Baronet when she was 21. John never married again. He and the Beresfords continued their friendship. John’s father was imprisoned and died in the Tower of London on 14th October 1690. John inherited the title of 2nd Earl of Tyrone. Three years later, Lady Nicola woke up and discovered Lord Tyrone sitting by her bedside. In response to her confusion he asked : ‘Have you forgotten our promise? I died Tuesday at four o’clock.’ That Tuesday was October 14, the day of his father’s death.

They had quite a long conversation, and to prove that he was not a figment of her imagination, John drew a curtain with mere waving his hand and wrote a note in her calendar, but it seemed not enough for Nicola to believe her eyes. Reluctantly, he touched her wrist with his cold and heavy fingers, and in a moment the sinews shrunk up. He then told her to cover the wrist so that no mortal eye would ever see it.

The ghost of Lord Tyrone informed her that she was pregnant with a son. All of his prophecies came true: Sir Marcus Beresford was born on July 16 the following year; Nicola’s husband, Sir Tristram Beresford, died unexpectedly eight years later; she married again, but because of her young husband’s misconduct had to obtain a separation; her son Marcus married Catherine Power, the niece of Lord Tyron, the only daughter of his younger brother James (you can read about them in my The Stag and The Dragon blog posts). Lady Nicola thought she escaped the last prophecy about the year of her death, but alas, her birth record was wrong. When she invited her friends to celebrate her 48th birthday, it came out that this was actually her 47th! She died the same night, on 23rd February 1713, her 47th birthday, shortly after the birth of her daughter Dorothea (1712), future Lady Desart.

Hope you have a fun and eerie Halloween.

PS Here are three links for you to explore: Teagan Riordain Geneviene new book Atonement In Bloom. This is not a hair-raising paranormal suspense thriller, but rather a relaxing and charming sort of magic that makes you think of packing and moving to the town of Atonement for good.

If you are looking for pure horror, visit FlyTrapMan blog 🙂