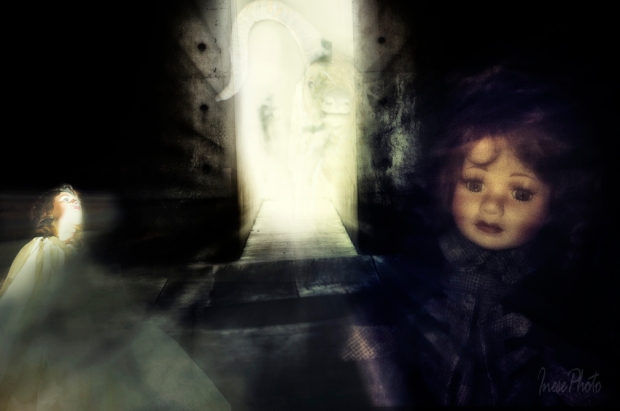 It was one hour before sunset when I reached Hook Head. I wanted to take a few pictures of  Loftus Hall and Hook lighthouse for this blog. I mentioned Hook Lighthouse in my blog post about Dunmore East and the oyster farm, because it is visible from there, and also in my Saltee Island posts –  for the same reason. Great location for a lighthouse, isn’t it?

But you have never heard from me about Loftus Hall before. 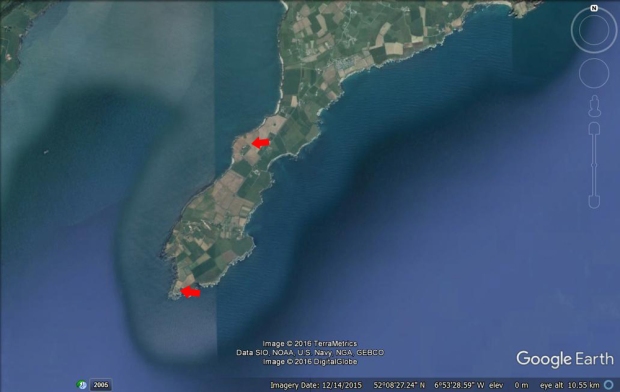 Loftus Hall is haunted. The origins of paranormal activity go back to 1350 when the prominent Redmond family built the Redmond Hall in this exact place. You can do a quick calculation, and yes, it was 666 years ago.

Centuries later, the unfortunate events took place. After Cromwellian confiscation, the Redmonds were evicted and the Loftus family moved into the house in 1666. The mansion was renamed Loftus Hall. Another century later, Charles Tottenham, whose first wife was Anne Loftus, resided in the house with his second wife and his daughter from his first marriage, also named Anne.

During a stormy night, a young man came to the house to seek shelter, and was offered hospitality. Young Anne was charmed and the relationship between the two progressed into something more prohibited.

One night they were playing cards and Anne dropped a card and bent to pick it up. It is when she saw that her lover had a cloven hoof. When his identity was discovered the young man went up through the roof leaving a hole that could never be repaired. 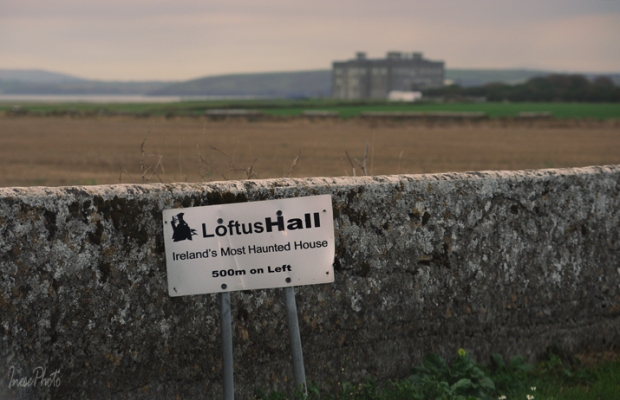 After discovering that Anne was pregnant, the family locked her away in the Tapestry Chamber, where she died in 1675, refusing to take neither food nor water. They say that skeletal remains of an infant were found hidden between the walls when the house was rebuilt. There were many seeings of Anne’s ghost and all kind of paranormal attacks on innocent people reported over the years, and several unsuccessful exorcisms were performed. The most successful was Father Thomas Broaders who, at least, ‘banished the Devil from Loftus Hall’. 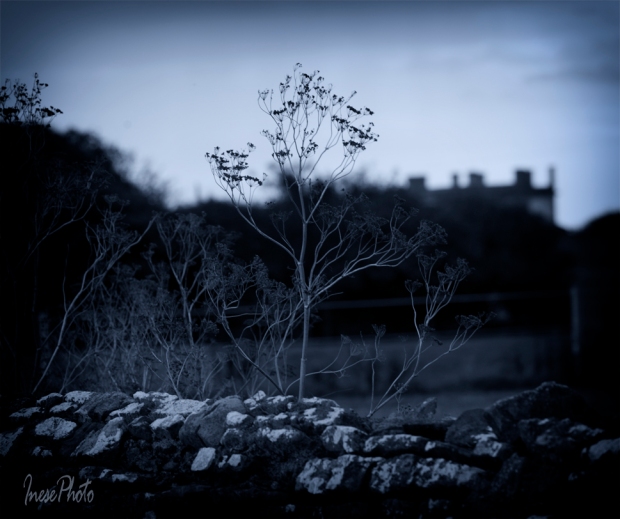 Loftus Hall changed hands many times. In 1870-71, the old Loftus Hall was heavily rebuilt by the 4th Marquess of Ely, and the present mansion took its place. In 1917, it was bought by the Sisters of Providence and became a convent. I saw a photograph with a group of happy nuns at the front entrance. The Hall was sold after two nuns mysteriously died on the stairs. In 1983 the Deveraux family bought the place and reopened it as Loftus Hall Hotel that was closed in less than ten years. All the hotel interior, pretty vandalised and decayed, is still there. In 2011 the place was sold to its current owners, the Quigley family who are running the haunted house tours. As far as I understand, many rooms still remain unused. 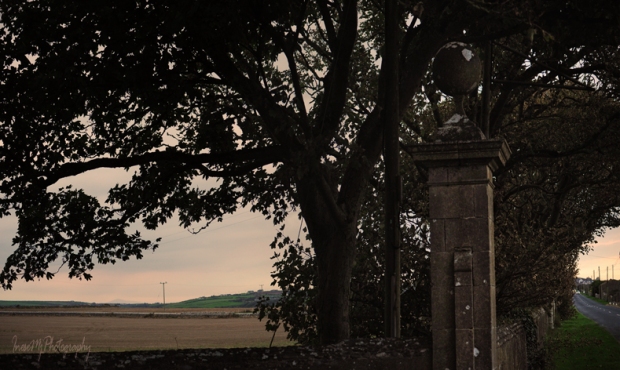 The gate is locked unless it is a tour day. 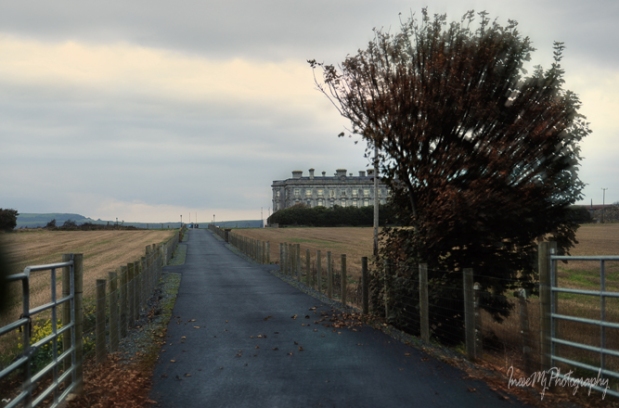 No, I didn’t take the tour. My friend did, I think she paid €60, no photography allowed. Why would I need a tour without being able to take pictures! She had a crucifix pendant on her and didn’t feel anything paranormal :). Her then boyfriend did feel some paranormal presence. They had some sort of séance to communicate with spirits, and it was quite impressive. Overall, she was happy with the tour, just thought it wasn’t worth €60 for an hour or something. Well, it was her fault, she shouldn’t bring that backup crucifix if she wanted to get scared 🙂

I couldn’t come any closer, just took some pictures on my way to and from the Hook Head. I don’t know if it means something, but I have already seen exactly the same cloud formations over the Loftus Hall in the photographs I found in Google. Also, when you click on the picture to enlarge it, you will see the drapes hanging from an opened window. Creepy 🙂 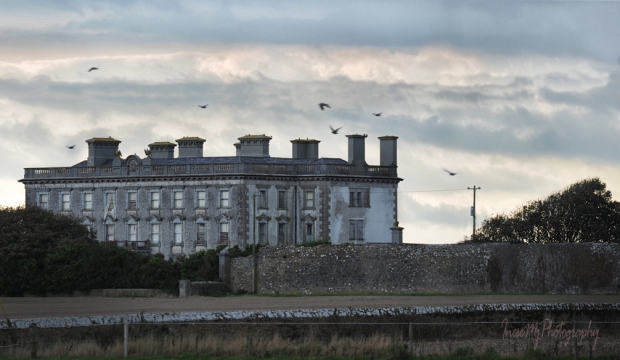 If you are brave, you can watch this Youtube video about Loftus Hall, but if you are not sure, then you better watch this short video taken in 2014. If you are still getting a message that you cannot watch the video in your country, try this one. If all of this fails, just put Loftus Hall in your search, but don’t miss the chance to see it all with your own eyes 🙂

There are many well-preserved ruins in the Hook Peninsula, and also many abandoned rural houses. I took pictures of some. This is a ruin of a church and a Roman tower in Templetown village. Henry II granted the church to the Catholic Military Order of Knights Templar in 1172. The Templars held a large chunk of land around the Waterford harbour until 1307 when they were suppressed and their property and land transferred to the Knights Hospitaller who themselves were suppressed in 1541. You can read an intriguing story about Irish Masonic history in this website.

William Marshal, a Knights Templar known as the Greatest Knight, built the lighthouse tower in the 13th century to guide the ships through the Waterford Harbour and to his port Ross. The monks looked after it until the dissolution of the monasteries. The lighthouse was already there since 1172, built by a Norman Raymond le Gros who used a mixture of mud and bullock’s blood to hold the limestone together. There is a legend that a Welsh monk St Dubhan built the first warning beacon in this site in the 5th century.

The tower was restored and repainted over the centuries. In the 17th century it came into the possession of the Loftus family, but in 1706 Henry Loftus leased the tower to the authorities. In 1860 three red bands were painted on the tower, but later changed to black and reduced to two. The cannon gun was fired during fog, later replaced by a hooter, then by rockets. In 1972 a foghorn was installed, but decommissioned in 2011.

In 1996 the lighthouse was automated and the light keepers left after almost 800 years of service. 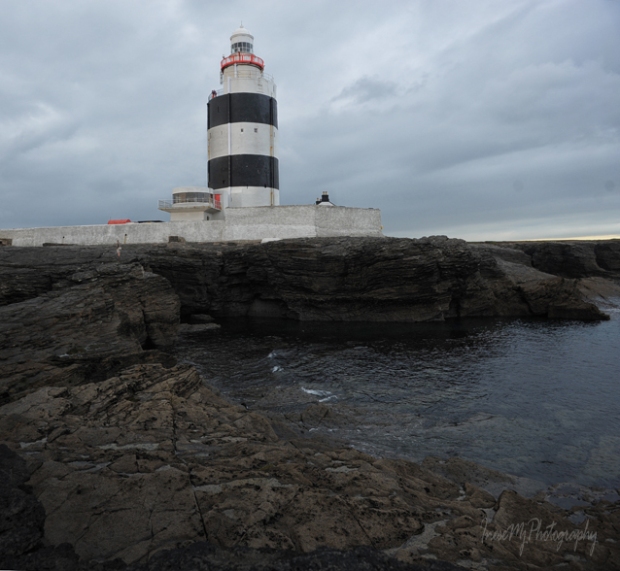 The evening was very warm and still with no breeze whatsoever.  These two chairs wouldn’t be left here in stormy weather: the sea spray can reach as high as the balcony of the lighthouse in a bad storm. 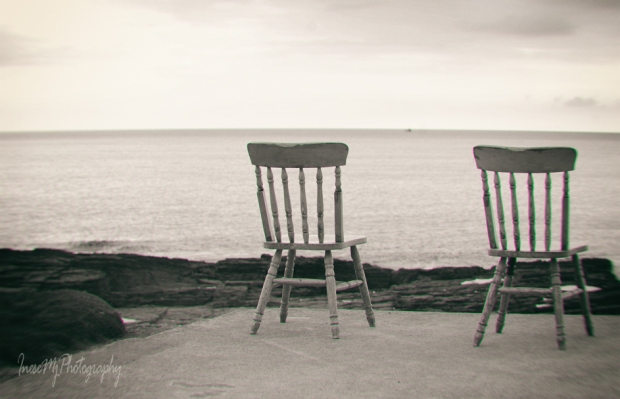 After wandering around the lighthouse I was on my way to the parking lot and saw the chairs again. 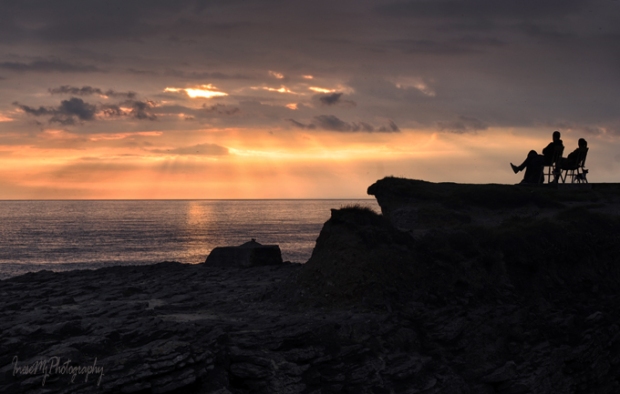 Then I saw this baby with California license plate. How on earth? 🙂 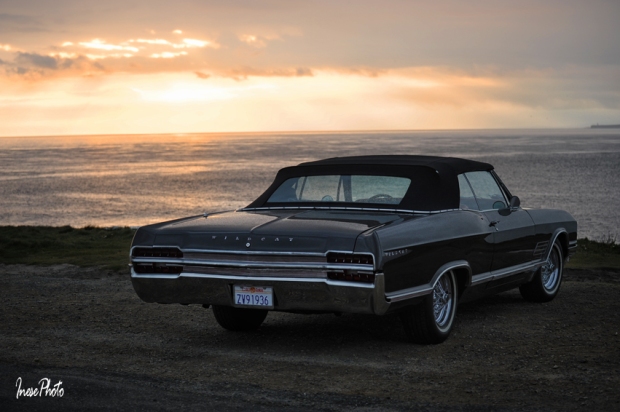 I walked to my car, and took a picture because I think it looks quite cool too 😉 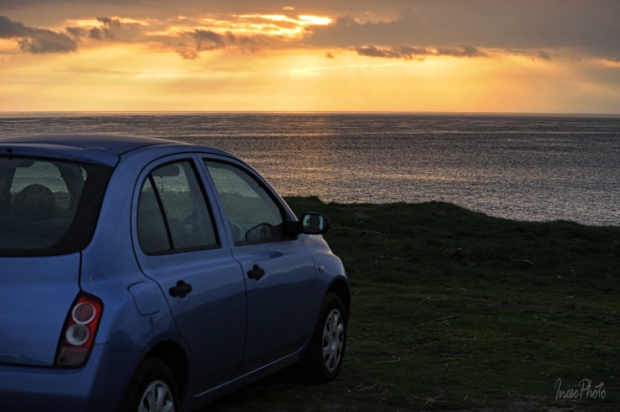 When I was already heading home, I took a wrong turn and came to the Slade harbour in the dark. Slade castle belonged to the Templars, Hospitallers and the Loftus family at the different stages of its existence. Now the ruin looks quite out of place in the changed landscape. 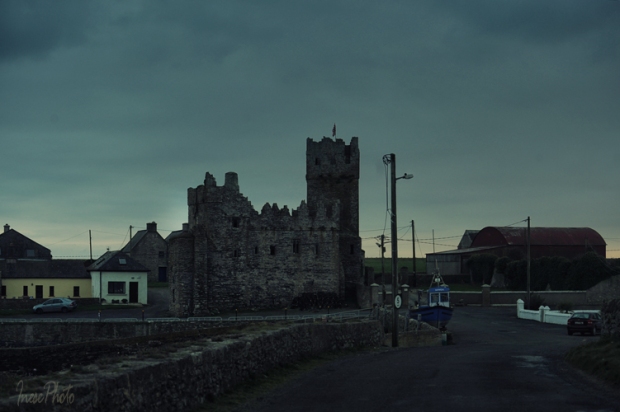 I took pictures of some abandoned creepy buildings with a hope to find a ghost in them. No such luck. 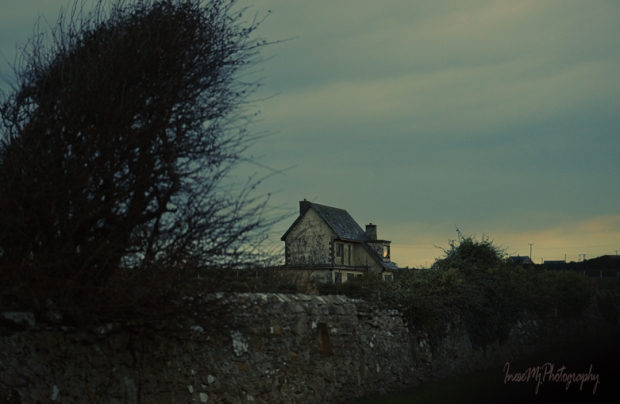 However, I have managed to take a picture of a ghost when it was the least expected 🙂 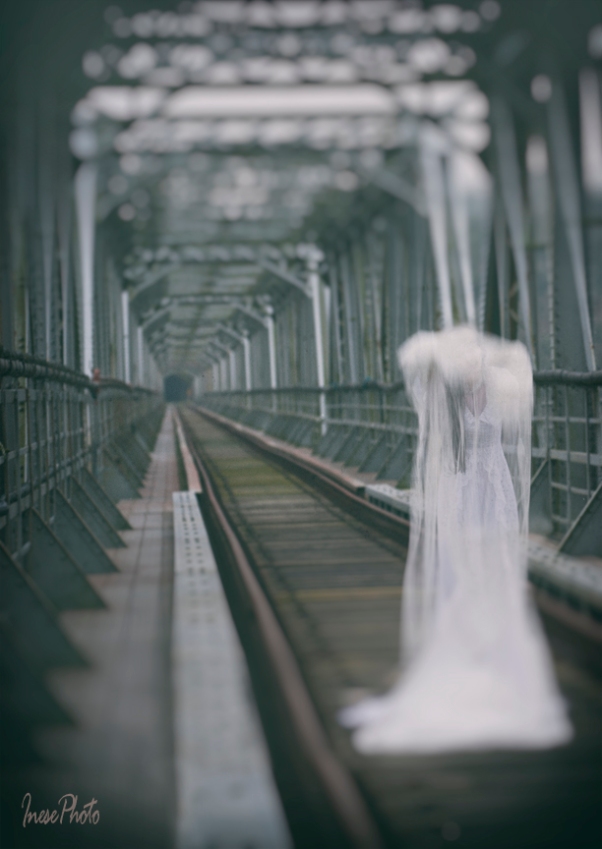 Happy Halloween! These dark tulips are hosting a tiny spider which makes them an appropriate gift for the occasion. At this special time of the year, please visit and follow sweet monster Dead Donovan and mystical and charming Poet Rose. 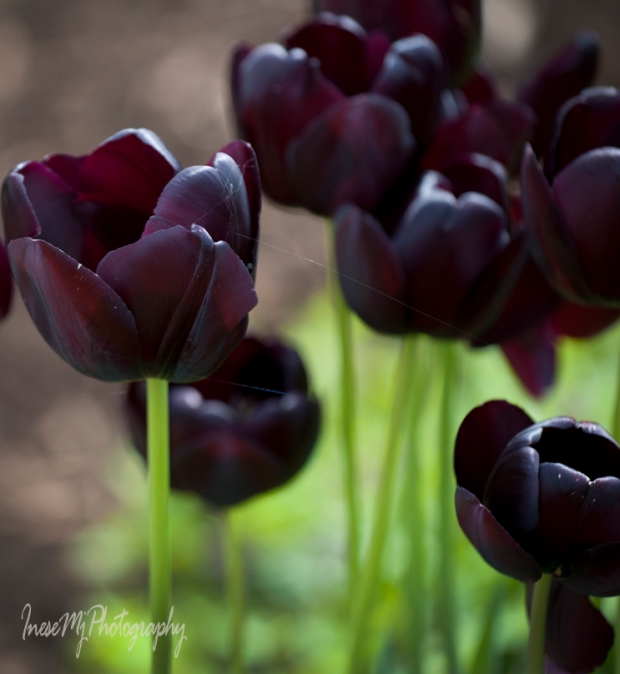 Have an exciting weekend!