I think that Ireland is at her prettiest in May-June when the Hawthorn hedgerows are in fool bloom. They say that a lone Hawthorn is a Fairy tree. People tie ribbons to them asking blessings from the Good Folk – Sidhe. There is such a tree in the outskirts of Clonmel. It is seen in the photographs that were taken in the beginning of the 20th century, but when I saw it just a couple of years ago, new ribbons were tied to its branches, which means that the fairies still reside there and answer prayers.

Anne Valley is no different from the other places, all frothed with the white lace of hawthorn flowers.

Looking up something in Google, I came across a Geocache page  where I learned that there is a cache at the dolmen near Dunhill village, and another one at the castle. I am not doing geocaching, but a couple of years ago our family came across a cache in the tree in Wasatch mountains. It was a fun surprise. I was going to take pictures of the dolmen anyway, because it stands close to Anne Valley,  so why not to do some treasure hunting. I took a bead bracelet with me and drove to Dunhill.

It is the Ballynageeragh dolmen, restored in 1940 ‘by P. Murray and sons’, as the inscription states. The massive capstone rests on a wall constructed from building blocks. The original stone is missing. The dolmen looks lonely in the middle of the field. 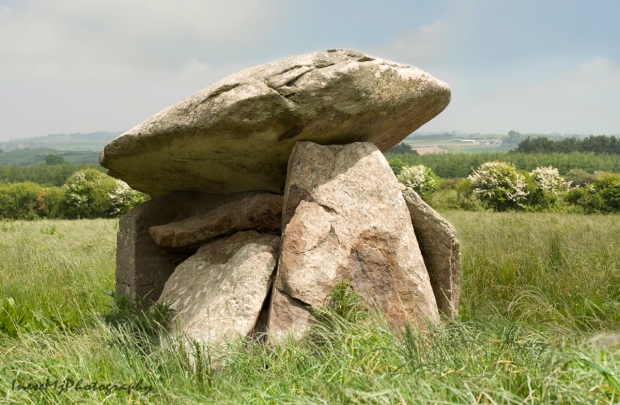 I went around the dolmen a few times, looking into the holes between the stones, but the promised tupperware box was nowhere to be found. I guess I am not a good treasure hunter after all. 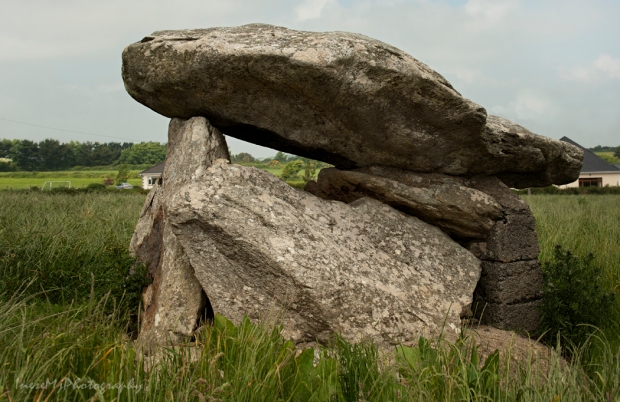 My next destination was the Dunhill Castle.

This is a look down from the hill. I could see all the world from there. The weather was unusually warm and humid, with not a slightest breeze. Humming and buzzing of insects were the only sounds that disturbed that tranquil wilderness.

This land was not always so peaceful. Unlike many others, Dunhill castle put up a resistance to Cromwell, and was destroyed by the artillery. In 1912, the east wall collapsed during a storm. 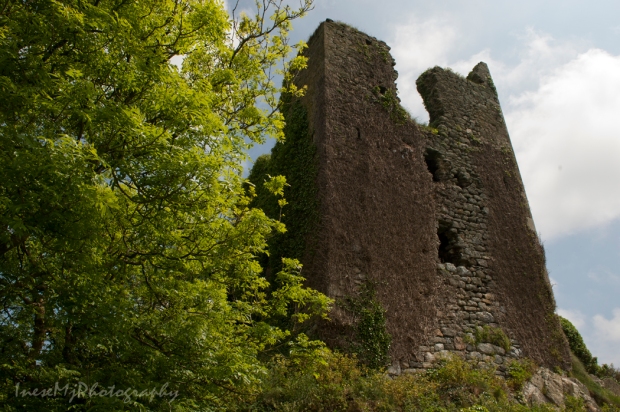 These steps lead to the first floor, but I didn’t climb them, unsure if I could make it there without railings, let alone get down. 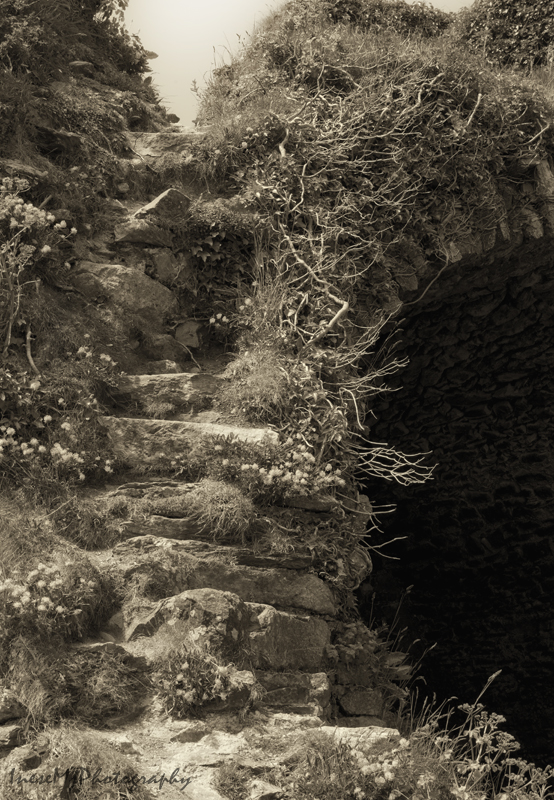 Look from inside the castle.

Another look from inside the castle, this time at the Anne Valley.  Anne River was navigable in the times of the Dunhill Castle glory. You can see the ocean in the distance. 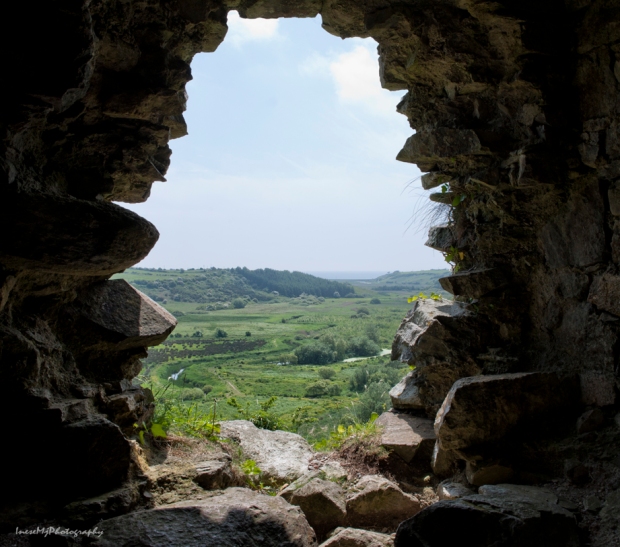 Anne river is rushing to join the Ocean. You can read more about this stretch of the valley in Jane Tubridy blog post, because she walked there, and I just drove 🙂 .

And this is where we started our walk, just a mile away, Anne River all adorned with the Crowfeet weeds, with The Dunhill Castle silhouette in background. 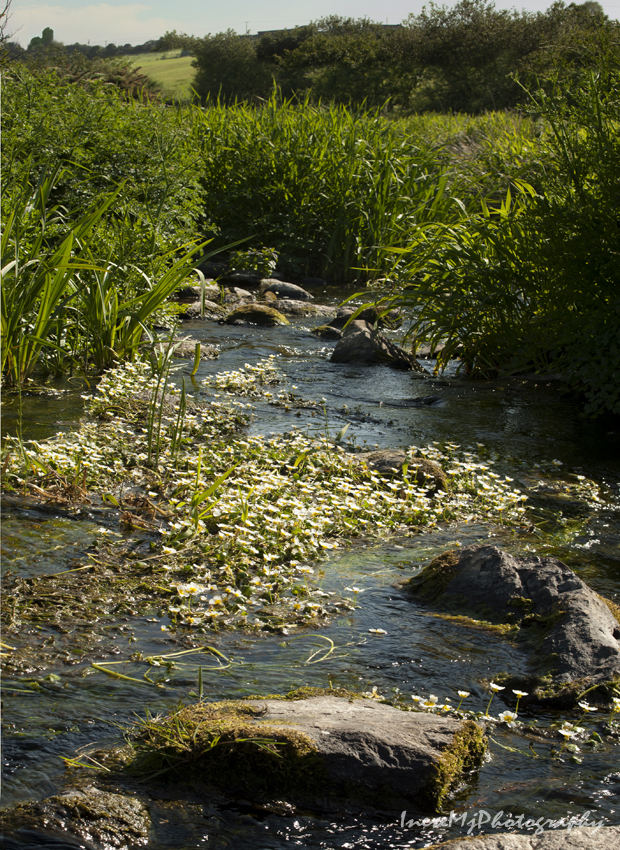 I stop at the car park at the foot of the hill to have a closer look at the horses I saw from the castle window. Anne River is slightly deeper here, and runs silently, without cheerful gurgling. Knobby Club Rush is rustling in the wind, … 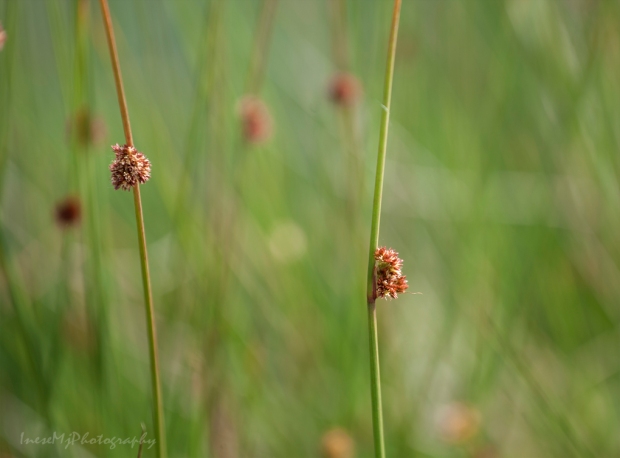 Foxgloves look almost fluorescent under the dark canopy of the trees on the hill slope. I love their spotted trumpets and the strings of the sturdy buds.

In my next blog,  I will write about the place where Anne River meets the Ocean. Hope you enjoyed the trip, and here is a Field sparrow for you to make you smile. He looks surprised because he didn’t see me come.

Ah, about the other geocache – I just forgot to look for it! 🙂