Something exceptional happened, worth to mention. We have got a snowfall in Waterford.

It didn’t last long though. When I finally got downstairs and limped out in the street, there was almost nothing to see. I had to use a slow shutter speed to make the falling snow visible in the pictures.

Aoife and Strongbow endured the snowfall well, despite their old age. Their marriage took place in August 1170, the day after the capture of Waterford by the Norman forces sent by Henry II and led by Strongbow who at that time was called Richard fitz Gilbert de Clare.

But the Vikings came here first. They arrived in the 9th century and created a town in 914. The history of their reign is very complicated and violent, but so where the times.

As we are speaking about the Vikings – here is a link to the blog  of amazing author who wrote one of my favorite books  – The Viking and the Courtesan. Shehanne Moore, thank you for your fantastic books! Please visit Shehanne’s blog!

A local artist John Hayes envisaged a giant Viking sword carved out of a whole tree.  John Hayes is a well known carver, and I have already posted photographs of some of his other work: Greenway train  and   The Angel of Fenor.    You can read about the  Viking Sword     and here is a video I found on YouTube. You can come to Waterford to marvel at the carvings as the work is completed and the sword has been placed on Bailey’s New Street, in so-called Viking Triangle. The street starts from the Reginald Tower where you can find the source of inspiration – a Viking sword made in the 9th century in Norway.

And this is the sword itself. It is 20 m long and carved out of a single Douglas fir. A viking house in background is the place of the virtual reality show King of the Vikings. Don’t miss it on your visit to Waterford. You will find yourself  barely escaping arrows and axes, fire and deep waters, right in the middle of the Viking Invasion. Very fun 🙂

Hopefully, John’s sword will be recognised as a world record.

By the way, John Hayes also built this giant post box for the letters to be delivered to Santa. The box stands under the mirror roof of the Apple Market.

I am not sure what I think about this roof, but I do love the reflections in the mirrors. 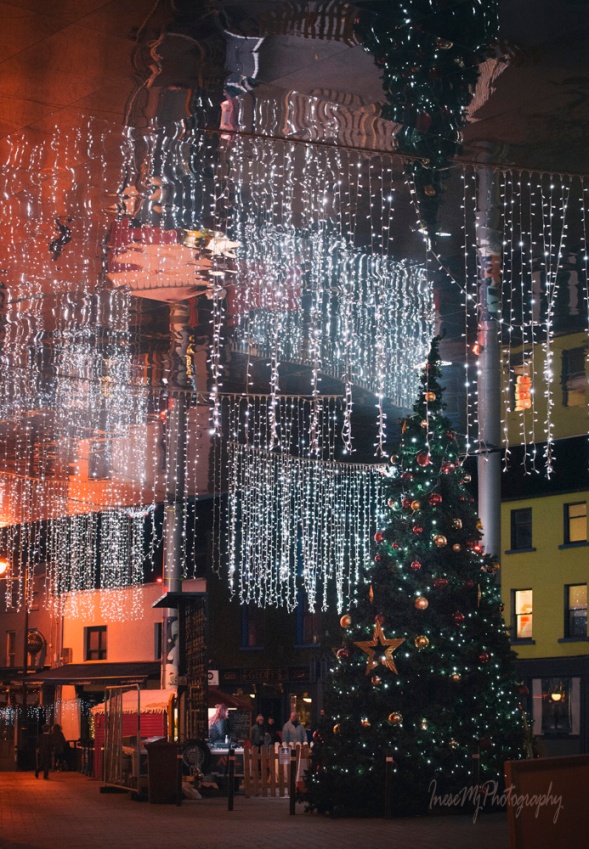 The days are very short in December. In early hours of the morning when the lucky people were supposed to watch the Geminids, I was driving through the slashing rain to pick up my prescription. As much of an optimist as I am, I took my camera with me. To my surprise, outside the city the sky was clear and the thin waning crescent  Moon was so pretty with Jupiter below and Mars on the right. I had to crop Mars out because it was quite far and didn’t add to the picture, but I included the Waterford bridge. It was at about 6.30 in the morning. I saw two shooting stars while driving, but nothing major, no balls of fire or anything like that. I wish I had more time so that I could stand there until the dawn.

This picture was taken 12 hours later.

Last night I ventured out again to see if I can get some more pictures for this blog. There was a charity event in the Holy Trinity church and the gates were open. I used the opportunity and took pictures of churchyard and tombs.

The horse ride must be fun. Except, I think the carriage full of people is too heavy for two horses. I remember there were four horses in the previous years.

I set up my camera to take pictures of the Waterford Eye. I am not sure if I should take a ride. I might, but may be another day 😉 I am playing with the shutter speed – don’t want to get just a monochrome blurred disc. This picture was taken at 10 seconds, as the wheel is quite slow. The light show gives me the opportunity to get very different patterns which is really fun. The passing cars leave a red line in the picture. 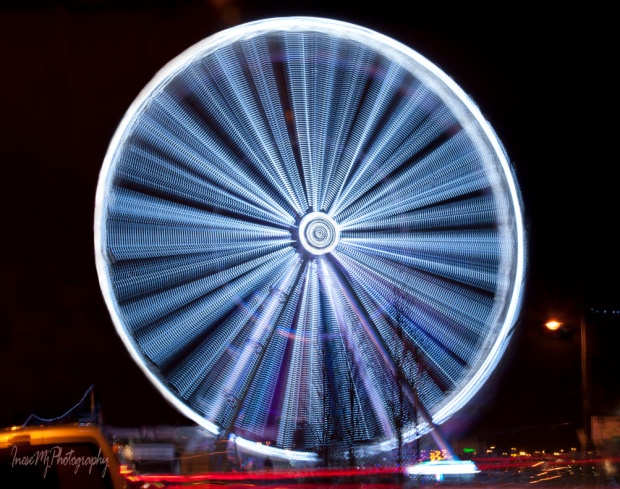 Last December I took pictures of the smaller Vintage Ferris wheel. I might try out a ride on that one 😉 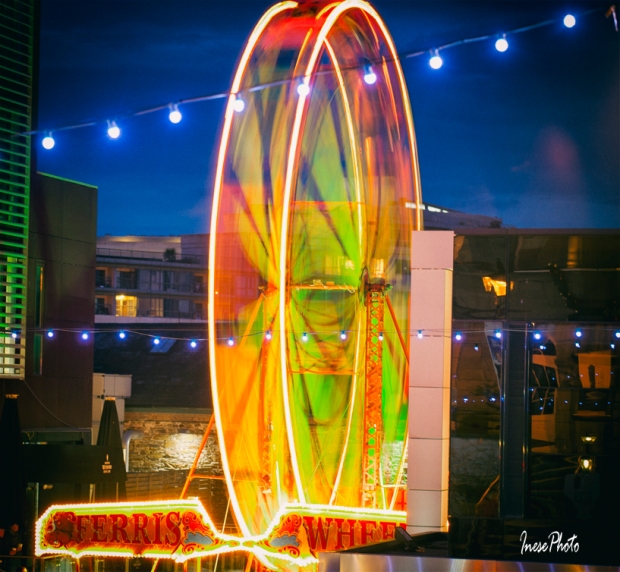 I walk to the other side of the wheel and take more pictures. Then I start experimenting with zooming the lens with a slow shutter speed after every three seconds ( shutter speed minimum 5 seconds; I didn’t want a completely blurred disc). I like the results 🙂 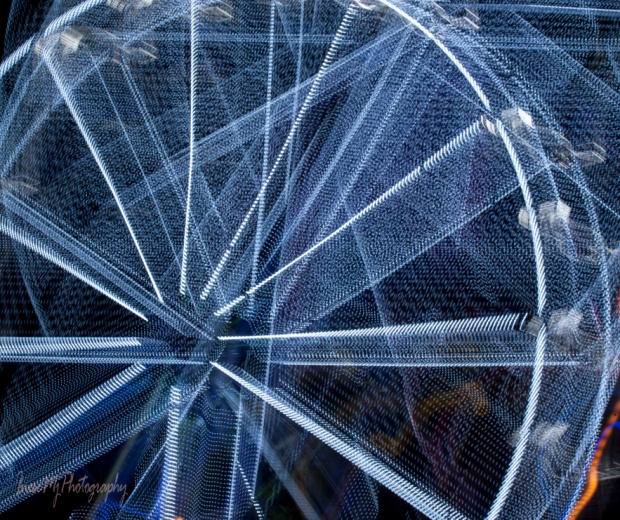 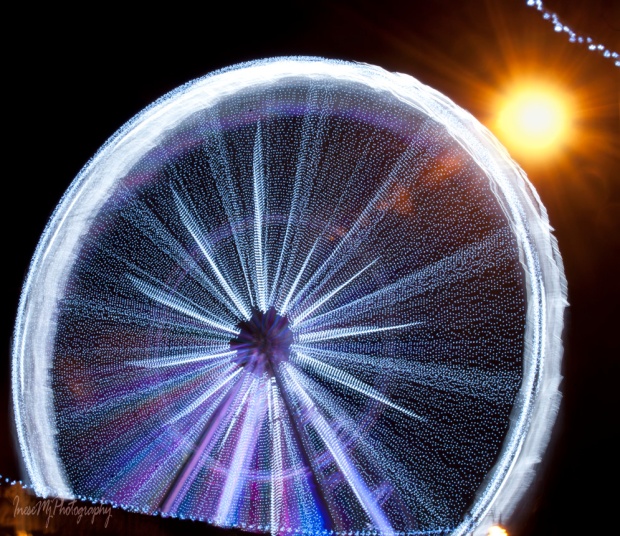 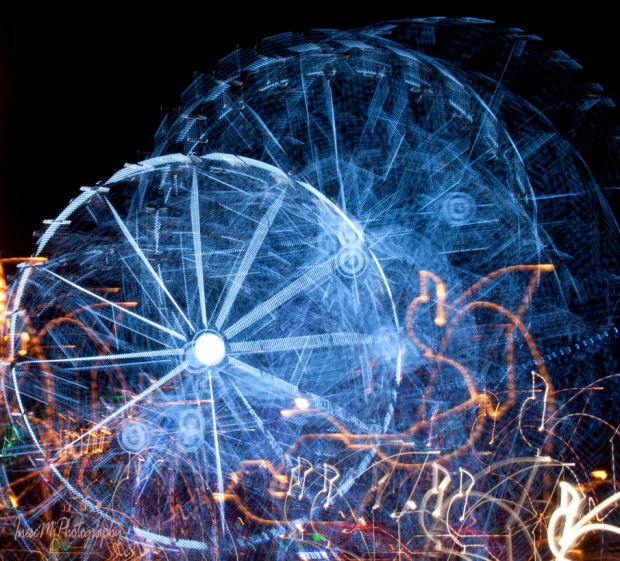 But what about Christmas? I didn’t see a single item that could be attributed to Christmas… until I looked down… wait, what is it there, under the porch, way lower than the pavement? A Nativity set! Tiny figures hidden from the people’s eyes, with the background made of garbage bags. Merry and bright it was. Sort of.

Political correctness is frowning at the use of the C-word, but I have never cared of anything political. It is the holiday I celebrate. What do you celebrate? Awesome! I already love your holiday, and your recipes 😉 Let’s celebrate together, and let’s hope your holiday will never get into the Political Correctness Naughty List 😉