This is the last blog post of the series about my Inishowen adventures (starting from October 23). I miss my favorite models, and hope to work with them some time next year. 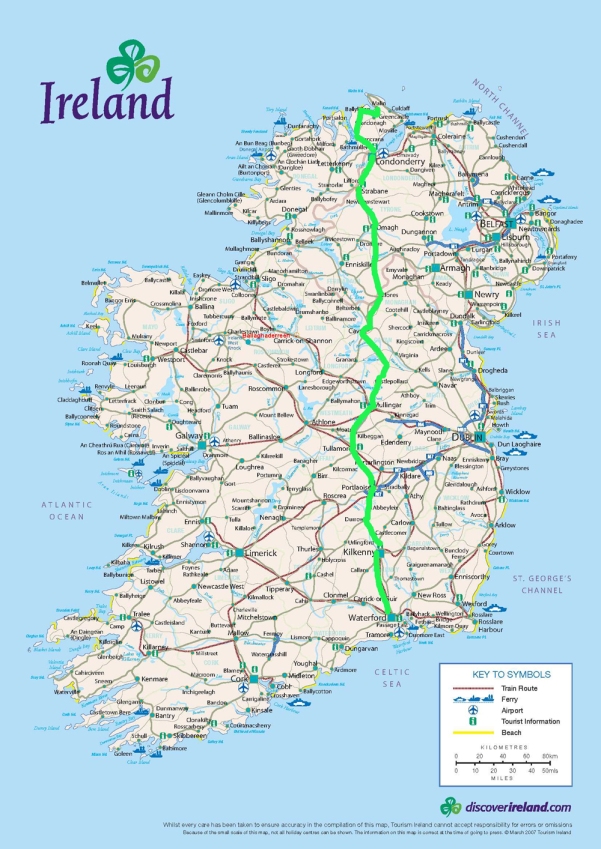 After leaving Abbeyleix, I drove to Port Laois where I stuck for almost an hour, changed my route, and headed to Tullamore Co Offaly, the motherland of Tullamore Dew, the triple distilled Irish whiskey.There I took this picture of the Visitor Center with the neighborhood of happy consumers in background.

After that I crossed the  bridge over the Grand Canal and proceeded to Mullingar, Co Westmeath.

The sun started to show up but the fog didn’t clear away. My plan was to stop at the Belvedere House and Gardens on the shores of Lough Ennell to take a break from driving and eat something. 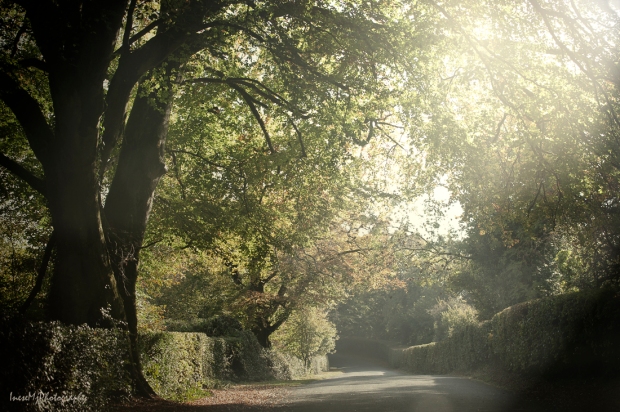 The house was built by Robert Rochfort in the 18 century. This man had big issues with his family. He had incarcerated his wife in their previous home at Gaulstown for an alleged affair with his brother Arthur, whom he later put in debtors’ prison in Dublin. He also built the Jealous Wall after falling out with his other brother George, to block off the view of his house on the adjacent estate.

The wall is built at a distance from the Belvedere House, and it is very high to ensure that the offensive sight is blocked off.

I walked through the gardens  down to the lake and back. I shared my sandwich with a friendly goat, took some photographs, and resumed my journey.

I didn’t stop in Mullingar, but took a photograph of the Cathedral of Christ The King.

I took R394 through Castlepollard because it is familiar to me and very beautiful. After the village of Finnea I entered Co Cavan. My luck was obviously pushed too far.

Driving around Cavan, I missed my turn to Cloverhill and wasted at least 30 minutes until I figured out where on earth I was. They say that the Celtic word for Cavan means both ‘hollow‘ and ‘small hill’… Do you remember hoodoos? There is another lovely word for you – drumlin, a clay hill of glacial origin. In between drumlins the valleys are poorly drained, with bogs and lakes.

The Garden of Eden has vanished, they say,
But I know the lie of it still.
Just turn to the left at the Bridge of Finnea,
And stop when halfway to Cootehill.

In Clones Co Monaghan I got lost again. I didn’t miss my turn or anything, I just didn’t know how to get to Omagh. Well, I knew the long way ( I used it on my way home), but there was a tiny road on the map  that I wanted to explore. I ate a 99 and walked around the square. Trust the 99, it is a cure for everything. I came across the guy who stood idling in the doorway, and he explained me how to find the road. He warned me of the dangers I might encounter, wild sheep etc. I was only happy to hear that 🙂 With his directions, off I went. My luck was back – not like in this video 🙂

A narrow country road took me to Fivemiletown Co Tyrone, and then up North to Fintona. 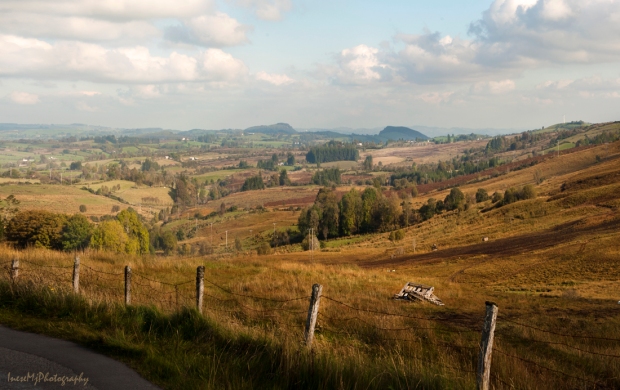 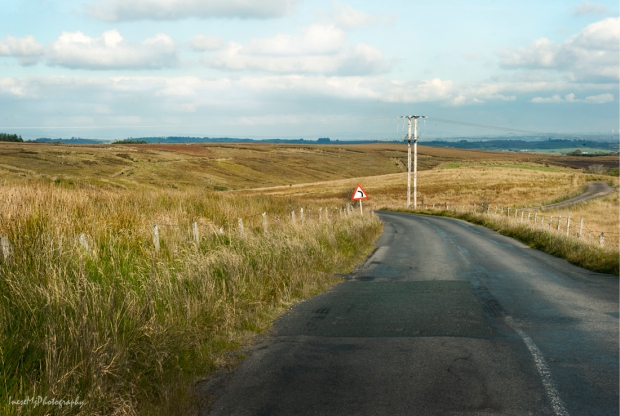 On the summit is the Lendrums Bridge wind farm, one of the largest in Ireland, with 20 turbines.  Another 8 turbines are located on Hunter’s Hill. 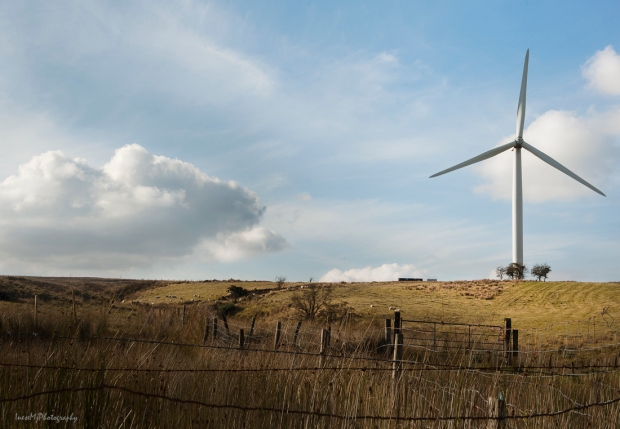 From Omagh I traveled through Strabane and Derry, which took me another 2-3 hours – 9 hours altogether with all the stops.

As you already know, I had a wonderful time in Inishowen.  The images below were taken from my hotel window early in the morning. There is no color processing, I only made a subtle change in the Levels  moving the black point slider to 4. It was exactly what  I saw with my own eyes. 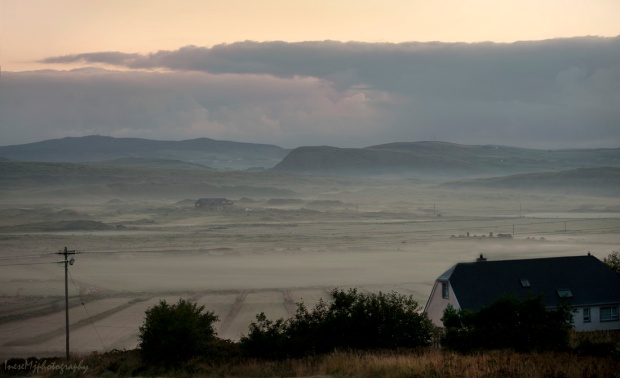 This image is zoomed and taken from a slightly different angle some 20 minutes later.

Isn’t it a fairy tale?

My journey back home was quiet and filled with sadness. As it became a tradition, I got lost around Clones again ( I wasn’t supposed to be there at all; I took a different road…) , but a good old 99 cheered me up, and I got directions at the petrol station. I crossed Co Cavan without incidents, my little car wriggling between the drumlins; stopped for petrol in Mountmellick at the sunset; sneaked through Durrow and Ballyragget in the dark and took a motorway from Kilkenny to Waterford “when the stars went blue”.  Couldn’t fall asleep that night.

I am missing Inishowen, but it is the time to move on. Thank you again Elena Shumilova  and Brendan Diver, Sean Derry, children and their parents! Thank you fellow photographers Dirk Lecluse, Katrina Parry, Suzanne O’Connell, Steve Thomas-Jones, Renata Dapšytė, Gemma Burton, Karolina Zadwórna-Turczyńska and many others. Hope we meet again soon!

I am very honored to be nominated for the Lovely  Blog award by Patrick Jones from The Linden Chronicles. Please visit his blog and read his books. I love them!

Thank you Patrick, I hope to maintain the loveliness 🙂

Now I have to reveal 7 things about myself